We said we’d be incorporating our newsletter elements into the new website so allow me to post my first movie review for the year. I do this over at Cinema Head Cheese so I’m going to try and set it up the same way: include a movie poster and trailer for each film I review. I don’t know if it’ll work. I’m kinda stupid with this here high-fallutin’ internet stuff. I do plan to use adult language and innuendo so if that kind of stuff offends you, you might want to check out other areas and posts at GLAHW. 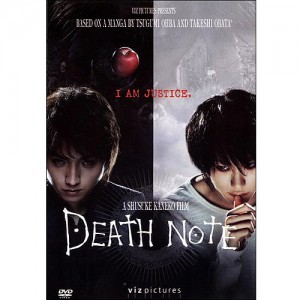 I was worried about watching this film alone because let’s face it, Asian horror scares the piss out of me most of the time. It’s usually about atmosphere and the creep factor as opposed to shock and blood (unless we’re talking about Thailand’s Sick Nurses which is 82 minutes of bat shit crazy gore). But the further this movie went, the less it was about supernatural creatures and more about human monsters.

Based on the manga by Tsugumi Ohba and Takeshi Obata (which was also turned into an anime series) Death Note is a live action feature starring Tatsuya Fujiwara (Battle Royale 1 & 2) as Light Yagami, a young man who has become disillusioned with the due process of justice and the law as he sees criminal after criminal walk free from punishment. And we’re not just talking piss-ant little crimes like muggings and shop lifting. We’re talking rapists and murders, very very bad people that escape justice based on technicalities.

Then one evening Light discovers a mysterious notebook: The Death Note. At first he thinks it’s a joke but soon discovers if he writes a name in the book,  40 seconds later that person dies. Since the law won’t punish the wicked, Light takes it upon himself to do it instead.

The Death Note also comes with its own Shinigami, the Japanese version of the Grim Reaper. This book’s reaper is named Ryuuk and he follows Light around, watching as he works his way through the criminal underground, killing off bad guys left and right. Only Light can see him, though, so he has to be careful about talking to Ryuuk out in public lest everyone thinks he’s nuts (yeah, because killing people at your whim isn’t crazy at all even if they’re totally asking for it).

Eventually the police figure out, with the help of a mysterious shut-in genius named L, that this vigilante, named Kira by the media, is not some supernatural creature but a human being with some unknown ability to kill. As they close in, will Light be able to deflect attention from himself and convince the cops he’s not Kira?

This movie is presented as horror but it’s really a thriller. Yes there are horrific elements to it because of the shinigami and all the killing. But the story I latched onto was how humans can change when given the power over life and death. Or perhaps their masks simply fall away and their true selves are revealed when they are free to do as they please. I think what happens to Light is the latter – he’s not corrupted by this absolute power. He is freed by it and his true character takes over.

And when a shinigami tells you that the way you’ve acted has surprised even him, that’s  seriously fucked up.

Speaking of Ryuuk, the CGI to create him was just terrible. It was like a video game boss was cut and pasted from someplace like Donkey Kong and plopped down in this flick. That said, Tatsuya really looked like he was talking to the Grim Reaper through the movie and not what was surely a tennis ball hanging from a pole. And I have to say that I ended up adoring Ryuuk, especially his fondness for apples.

Aside from Light, Ryuuk, and the quirky L, the rest of the characters were window dressing. They didn’t really move the story along except to be pawns in Light’s machinations, although his girlfriend, Shiori, ends up revealing Light’s true sociopathic nature in the end.

Overall, though, this movie was very entertaining and intriguing. Now I’ve got to find the manga, the anime, and I’m gagging to watch the sequel!