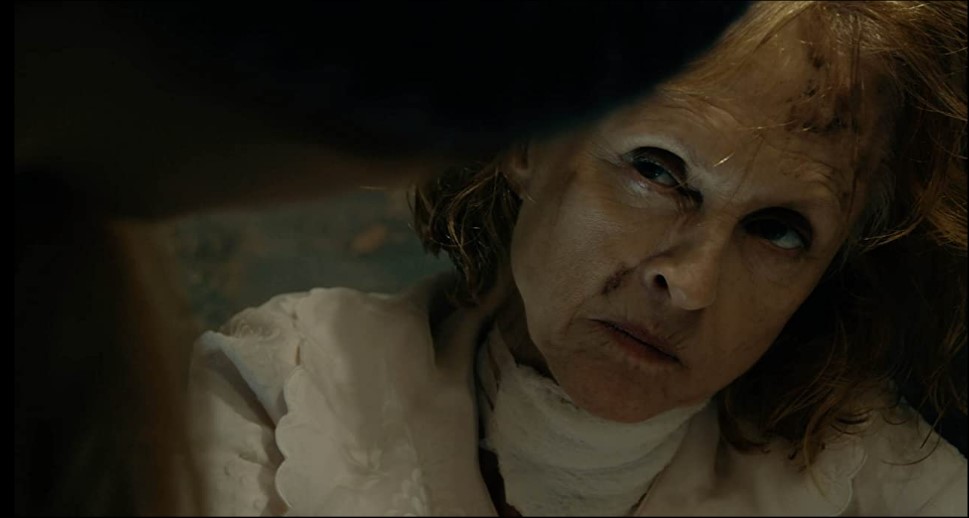 When I thought about what movies I wanted to present I was torn between Ghost Stories and Possession. In a way, they’re two sides of the same horror currency – both representing a loss of control, whether it’s of a piece of property or one’s own soul. You can’t reason with a ghost, especially one that’s been haunting a scape of land for years, nor are entities bent on inhabiting unwilling bodies willing to negotiate. Both of those aspects of human misery are terrifying to me, which is why they’re my favorite sub-genre of horror. I’ve taken a few liberties with my list, mixing hauntings and possessions because after all, it’s not like you’re here to stop me.

Maybe the Devil made me do it. -MontiLee Stormer

The Taking of Deborah Logan (2014) – Yes, it has Opal (Jill Larson) from All My Children, but that’s not the only reason why it’s good. What starts as a PhD thesis project charting the mental decline of Deborah, an affable and high-spirited Alzheimer’s patient, and not only a loss of her mind, but of her soul. Mia (Michelle Ang) studying her subject and the familial strains of her subject’s illness, tackles it challenges head-on and on the surface, it seems like a simple task, but Deborah is no ordinary subject, and her slide from sentience isn’t just Alzheimer’s. Sidestepping the usual tropes of traditional possession films, The Taking of Deborah Logan has no priests or church intervention, no crucifixes, and still, it’s a clever little slice of possession horror with plenty of practical effects and incredible acting.

Host (2020) You may have heard tell through various internet conversations of this not quite a feature-length film that scared the poop out of us just as the meat-life horrors of the Pandemic were settling into our souls. It’s not the first film to be filmed solely via video conference, but it’s definitely one of the most terrifying. During quarantine, a group of friends are remaining connected via Zoom, as we all did, and to shake things up, one of them hires a medium to perform séance. It all seems to go well until it doesn’t, summoning an entity that jumps from screen to screen making everyone wish they’d read a book that night instead. While not entirely (or at all) a possession film, I chose this one because I felt like it. There’s a reason it holds a 100% on Rotten Tomato and for a 56-minute movie, you won’t find more relevant scares in a compact package.

Host is currently streaming on Shudder.

The Babadook (2014) Mental illness and possession go hand in hand, which is not surprising since mental illness used to be a prerequisite to calling out an old priest and a young priest. In Jennifer Kent’s directorial debut, Amelia (Essie Davis) and her son, Sam (Noah Wiseman) are traveling together along the highway of grief, depression, and prolonged PTSD. When Sam begins to see Mr. Babadook, a horror of a visage in a top hat and claws, Amelia begins to see it herself, fighting against her own rational mind that imagines a bloody end for all involved. Horror as allegory is one of those easter eggs of the genre that is subtle yet gutting when done right. It’s one thing to uncover the face of a monster, and entirely another when that face is your own.

The Babadook is currently streaming in IFC Films Unlimited or can be rented through Amazon Prime.

Anything for Jackson (2021) In a twist on a familiar theme, Dr Henry (Julian Richings) and his wife Audrey (Sheila  McCarthy) dabble in unknown majicks in order to perform a reverse exorcism on a kidnapped pregnant woman to bring back their grandson, Jackson. Aside from the bizarrely well-meaning antagonists, Anything for Jackson is charming in creeping dread of ritual and ceremony with two novice occultists traveling in circles no bridge club would ever approve of. As their actions spawn unintended consequences – you know, apparitions, Veil bleed, madness – their devotion to the cause faces its most challenging test – success. It’s clever and an incredibly fun watch.

Anything for Jackson is currently streaming on Shudder.

Son (2021) On the run from the cultists she escaped from as a child, Laura (Andi Matichak) flees with her own son, David (Luke David Blumm), when an attempt to bring them back into the fold fails. With few friends and fewer resources Laura turns to increasingly desperate measures to keep one step ahead of the cult, and David alive as he begins to show signs of a sickness no conventional medicine can cure. Like Chad Crawford Kinkle’s Dementer (2019) Son explores the trauma of cult survivors who believe they’ve ditched their pasts for only to find it matching towards them.

Son is currently streaming on Shudder.

The Conjuring (2013) I’ll never sing the praises of Ed and Lorraine Warren, and I’m absolutely not going to do it here, but their fictionalized selves, played by Patrick Wilson and Vera Farmiga are the bee’s knees supernatural investigations. Called to a Rhode Island Farmhouse to investigate paranormal events, they square off against Bathsheba, long-dead town boogeyman. Bathsheba checks all of the witch boxes – pact with the devil involving infanticide, suicide, and of course, cursing the land and everyone who sets foot on it. Directed by James Wan, the slick retelling of an inflated happening doesn’t make any of it more true, despite what the “based on a true story” begs you to believe, but that’s not why it’s such a fun watch. A snappy pace with the right balance of jump scares and prolonged dread which for me create a payoff that makes me giddy.

The Conjuring is currently streaming on Netflix and HBO Max

REC (2007) At the heart of REC is demonic possession, cased by a virus, transmitted by blood. It’s like 28 Days Later (2002) except told through the lens of a reporter (Manuela Velasco) and her cameraman (Pablo Rosso) on a Fire and Rescue ride-along trapped in an apartment building as the infection spreads from one tenant to the another. Remade for English-speaking audiences as Quarantine (2008) REC, like all Spanish horror films, has at its heart demons, neglect of the Church, and the general fallibility of humans. Found footage films had come a long way since 1999’s Blair Witch Project, finding new ways to tell first-person stories with cameras, and REC used the unbiased lens of a photojournalist and events h happening in real-time to drag us in and eat our faces. It’s a movie that’s fun to return to over and over again.

REC is currently streaming on Amazon Prime (AMC+) and Crackle.

MontiLee Stormer watches movies for a living. It really is as awesome as it sounds.  You can find her reviews on MovieReelist.com. She employs a ‘well-compensated’ sniper now-aways because everyone needs a hobby. MontiLee lives in the Metro Detroit Area with her husband, two cats, and several fibercraft projects that keep her safely off the streets.