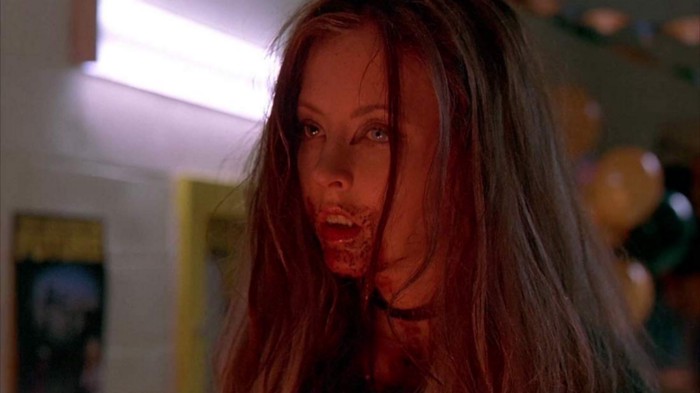 Check your lunar calendars—this week, the moon is full and ready to go to the dogs. Throughout history and across continents, from ancient creation myths to modern social hysteria, the werewolf is the enduring archetype for the monster within ourselves. To their credit, horror movies have crossbred the classic lycanthrope with different genres, locales, tones, and anxieties for contemporary times. Some movies in this pack are mongrels, others close to classic purebreds. All of them are worth a howl or two.

Balancing horror and humor, The Howling is a good example of how werewolves can still be scary in modern times. Karen White, a TV anchor, is traumatized after a sting operation to catch a serial killer almost gets her killed. As a way to mentally recover, she and her husband head to a seaside village to relax—only to find the resort is filled with werewolves. Directed with bright, macabre panache from Joe Dante, The Howling boasts interesting sexual and psychological themes with its pulp story, along with some killer practical special effects.

Judging by this list alone, the majority of werewolf movies focus on the male side of lycanthropy. Ginger Snaps turns the tale and focuses on two sisters, one of whom is infected by a werewolf bite. As Ginger slowly transforms, her sister Bridgette takes on the harrowing tasks of finding a cure while hiding the quickly mounting bodies. Ginger Snaps has a dark, quirky sense of humor that matches its feminist themes of adolescent otherness. Both sisters experience the horrors of growing up and coming into their own—with sometimes monstrous results.

An American Werewolf in London (1981)

Is this a horror movie that’s too funny? Or a comedy that’s too horrific? Who cares? Watching special FX artist Rick Baker work his magic for the werewolf transformation is worth the price of admission. David, the titular American, is backpacking in the Yorkshire moors when he is attacked by a wolf. When David starts having bizarre breaks from reality, he soon realizes that it wasn’t just any old wolf that bit him on holiday. Both a cult classic and a modern horror great, An American Werewolf in London still holds up many moons later.

“Based loosely on a video game” is usually the death knell for any movie, let alone a horror movie. Werewolves Within bucks the trend with clever casting, a knowing hand with horror, and a great murder-mystery vibe that comes from the video game in question. Forest ranger Finn Wheeler arrives in a small mountain town that soon falls victim to what look to be werewolf attacks—but are they? And if so, who’s the local lycanthrope? A fun whodunit with great improv actors, Werewolves Within earns the title of best video game “adaptation” with a sly wink and some good jump scares.

Wry, offbeat, and surprisingly creepy, The Wolf of Snow Hollow feels like an indie movie that happens to have a vicious monster running wild in it. John Marshall, former alcoholic and current police officer, is balancing sobriety with his ex-wife, rebellious teenage daughter, and aging father, who also happens to be the sheriff. When strange murders begin happening around the full moon, rumors of a werewolf threaten to push John back into old habits and bitter regrets. If you’re in the mood for stark pathos in your monster movie, The Wolf of Snow Hollow has what you’re looking for.

Taking the lore with a grain of salt and a dollop of cheese, Teen Wolf is the coming-of-werewolf-age teen comedy that follows Scott Howard, an average kid who finds out that lycanthropy runs in the family. Nevermind that everyone accepts Scott’s transformation so long as he dominates on the basketball court. Just enjoy this silly comedy and the glimmers of Michael J. Fox turning into the pop movie icon he would eventually become.

This low-budget, high-octane action/horror hybrid has everything you could ask for: Scottish special ops soldiers, a cabin in the woods, a dog-loving protagonist, plenty of blue language, and lots of the red stuff. Did I mention a pack of seven-foot-tall lycanthropes? They’re in here too, terrorizing a team of grunts on a training mission gone awry in the Scottish Highlands. If you want less eek and more oomph in your werewolf flick, give this one a go.

M.C. St. John, a native Michigander, lives and writes in Chicago. He is the author of the short story collection Other Music. His stories have appeared, as if by luck or magic, in Burial Day Books, Dark Ink Books, Oddity Prodigy Productions, and Wyldblood Press. Check out what he’s writing next at mcstjohn.com.