People We Love (and think you should love, too)! We here at GLAHW have met so many amazing and talented people out in the big wide world (you know, OFF the internets) and thought it was high-time we introduced them to you. Who knows? You may end up discovering a favorite new artist, photographer, writer, or all-around awesome human. This time around, Ken MacGregor will be talking to an author who is viscerally cool: Jessica McHugh.  http://www.jessicamchughbooks.com/

GLAHW: How long have you been writing? Professionally?

JESSICA McHUGH: I’ve loved writing stories and poetry since I was a kid, but I didn’t take it seriously until I was around nineteen. At that time, I worked in a perfume kiosk at the mall, and since we didn’t do much business, I had lots of time to kill. I read a lot, of course, especially horror and fantasy. I can’t pinpoint what kicked me off—though I could probably blame months and months of reading Roald Dahl short story collections—but one day I decided to set aside other people’s stories and write my own. Most were terrible and fairly derivative, but once I started I couldn’t stop.

I spent the next five years writing novels, novellas, and short stories without considering their future. I didn’t write to be published. I didn’t want to be published at that time. I just wanted to create, to follow my passion until I fell so head over heels in love with writing I couldn’t stop if I wanted to. And it worked. On my worst days with a full-time job, when I was working in molecular diagnostics for 8+ hours and throwing myself into insane revisions as soon as I got home, I never contemplated giving up. Even now, when I’m dealing with too many projects, too little money, too many health woes and familial issues, and writing seems like the ultimate stress in my life, I love it too much to let it go.

In summation, Writing and I are clearly in an abusive relationship, and you’re all enablers.

GLAHW: What draws you to write horror?

GLAHW: Do you ever write something and then sit back and think “what the hell?!?”? If so, can you give us an example?

JESSICA McHUGH: Many times. For instance, the book I mentioned above. While I was writing “The Train Derails in Boston” for NaNoWriMo 2012, it didn’t disgust me. I actually thought it was pretty sexy as far as horror erotica went. But once I sat down to revise it, I frequently found myself leaping from my computer chair to shake off tremors of revulsion. “What the hell” was pretty much my motto while editing that novel. It…I…well…you’ll see when the book comes out next year from Perpetual Motion Machine Publishing.

GLAHW: Do you outline or are you more of a “pantser”?

JESSICA McHUGH: I usually dive right in when it comes to short stories. But since I’ve been writing most of my novels during NaNoWriMo, outlining is a must. The first half, at least. I like having a road map for the beginning of the journey, but after I’ve written a few chapters and learned more about who my characters are, I tend to sit back and let them lead me to the end. But if I feel stuck in any piece I’ll typically step back and do some outlining or whiteboard sketching. But I was 100% pantser when I started out. It took me too long to realize an outline can be a writer’s best friend.

GLAHW: Tell us something interesting about you not related to your books.

JESSICA McHUGH: Since being a novelist isn’t the most lucrative profession in the world—shocking, I know—I have a weekend job leading food tours around downtown Frederick in Maryland. I lead up to twelve people around this gorgeous part of my hometown, ducking into different restaurants that provided dishes for the guests, and telling stories about the history and culture of Frederick. It’s a lot of fun, and it allows me to engage in non-fiction storytelling, which I don’t do much in my career. Plus, the more strangers I meet, the more stories I get to steal. 😉

GLAHW: What, if any, negative experiences (aside from rejections) have you had with publishers?

JESSICA McHUGH: I’ve been fortunate to work with some amazing presses, but there have been the occasional bad apples that didn’t pay authors on time—if they paid at all—or were vanity presses in disguise. One such publisher promised they would rerelease my novel with a new cover (after two years with a god-awful one) and fresh edit (even though the editor was cold balls on toast and added more mistakes to the book). I fought back against the revisions, of course, which I believe was part of the reason the release was delayed. I tried contacting them to no avail. I received no payments, no updates, and was basically given the cold shoulder about my favorite story from the McHughniverse. It was a huge disappointment, especially since they broke our contract taking so long to re-publish the novel. But when I told them I wanted out to cut ties with them due to their unprofessionalism, they tried to charge me for breaking the contract. It was a big mess. It ended as amicably as possible, fortunately, but I know plenty of writers who haven’t been so lucky. Like writing novels isn’t hard enough.

GLAHW: If you could be one of your characters for a day, who would it be and why?

JESSICA McHUGH: Darla Decker from “The Darla Decker Diaries” Even though I put that poor teenager through the wringer, she experiences less torture than characters from my darker novels like “The Green Kangaroos” and “Rabbits in the Garden.” I’d gladly relive my first period over being a drug addict or constantly questioning my sanity. Plus, her friends are goofballs. I’d love spending a day with those wacky kids.

GLAHW:  If you had to give up writing, what’s your second career choice?

JESSICA McHUGH: I don’t even want to think about that. Even if I lost both hands and my tongue, I’d find a way to get my writing work done. And if it was impossible…I don’t know. I guess I’d have to settle for my backup career as Indiana fuckin’ Jones.

GLAHW: How often do you write? Do you have a daily word-count goal?

JESSICA McHUGH: I write and/or edit every day 1) because it’s my job, and 2) because I want, need, and love to write every day. When I look back at how much I’ve improved over time, it makes the most sense for me write as much as possible. I have my off days, of course, when I binge Netflix and don’t get much done. But even then, I’m thinking about plots, maybe doing research for future projects. I don’t have a daily word count unless I’m participating in NaNoWriMo, though. My motto is, “Don’t aim for a word count. Aim to make your words count.”

JESSICA McHUGH: I love green beans with almonds so much. No further explanation. They’re just so damn tasty.

GLAHW: You write in different fields: horror, bizarro, YA – do you need different external stimuli for each (music, etc.)?

JESSICA McHUGH: I usually write to instrumental music for all genres except my YA series. For that, I have a Darla Decker Inspirado playlist with current hits or 90s/2000s pop. That playlist is definitely responsible for my Miley Cyrus obsession. But when I’m writing to movies or TV shows, I tend to stay within the genre. I’ll watch Nip/Tuck or Carnivale while writing darker stories and Gilmore Girls or Boy Meets World while tackling my YA series.

GLAHW: Is there anything that scares you?

JESSICA McHUGH: Ha! Pretty much everything, yes. I love to write horror, but I usually can’t read or watch horror unless it’s a sunshiney day and I’m not alone. There are exceptions for my favorite horror films like Poltergeist and The Thing, but it’s extremely difficult to convince me to watch a new horror movie at night. And Nightmare on Elm Street? NO WAY. Not even during the day.

GLAHW: What do you read for pleasure? Favorite authors? Recommendations?

JESSICA McHUGH: I’m listening to a lot of audio books these days. I recently finished “The Virgin Suicides,” “The Girl on the Train,” and am currently listening to “Steelheart.” But I never get tired of Roald Dahl. I love his short story collections like “Skin” and “Over to You,” and I can read them over and over. Oh, and if you haven’t read his novel “My Uncle Oswald,” do it now. It’s hilarious.

JESSICA McHUGH: As you can see, I’ve wanted to be a writer for quite a while. 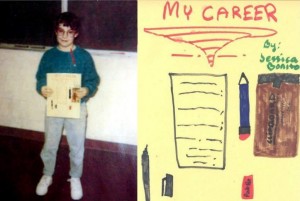 JESSICA McHUGH: I like to cuddle up with my Tylercat, drink a beer, have yummy dinner with my husband, and catch up on a favorite show/movie for a few hours…

…before I inevitably return to writing work.

JESSICA McHUGH: Peter S. Beagle, author of “The Last Unicorn” and countless other rad stories, told me once that alcohol doesn’t have calories when consumed with friends outside of the home. I took this advice to heart—and to the belly.

Ken MacGregor’s work has appeared in dozens of anthologies and magazines. His story collection, “An Aberrant Mind” is available online and in select bookstores. Ken is a member of the Great Lakes Association of Horror Writers and an Affiliate member of HWA. He edits an annual horror-themed anthology for the former. He has also dabbled in TV, radio, movies and sketch comedy. Recently, he co-wrote a novel and is working on the sequel. Ken lives in Michigan with his family and two “domesticated” predators.