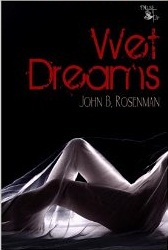 by John B. Rosenman

So often, we like to think we are rational, loving creatures when unknown even to ourselves, we are just the opposite: mad, cruel, selfish, and lustful.  We pray to God and secretly worship the powers of darkness.  In my story,  “Wet Dreams,” a couple rents a mansion in the country for the summer to mend their troubled marriage.  Will they succeed?  It all depends what happens after they make love and close their eyes.  Yes, in dreams lie salvation,  but as Goya wrote, that “The sleep of reason produces monsters.”

An hour later, he lay back naked and basked in the afterglow. Karen herself turned off the lights and snuggled happily against him, both their bodies covered by a single sheet. Like him, she was exhausted and drenched with sweat. He listened to her breathing slow and descend toward sleep.

Eyes closed, he thought of their coupling, entangled bodies, which they had seen reflected from many positions: he above her, then behind, Karen above, and then receiving him sideways. He started to smile but found himself imagining their own images watching them in the shadows like second selves. Who knows, perhaps their alter egos would wait till they slept and then creep into their bodies and possess their souls. And, in the morning, when they awoke…

Where had he gotten such a weird idea? He tried to puzzle it out, but sleep soon stole upon him.

Sometime later he awoke, smelling perfume. Something exotic—jasmine? Whatever it was, it must be his imagination because Karen wasn’t wearing any. But it was so sweet and fragrant, so…