31 Days of Halloween – a Catalogue of Anthology Horror 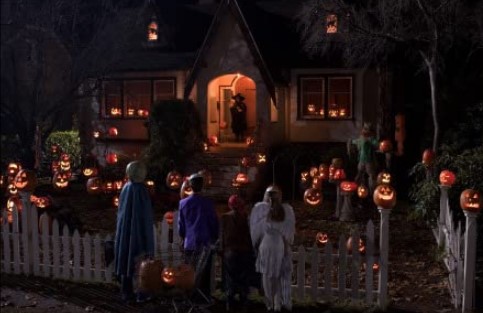 What’s better than watching one horror movie? Sitting down for a horror flick and getting multiple stories in one film. That’s what a good anthology film gives you — multiple good plot lines, often tied together with an overarching story or plot device, occasionally interconnected. What follows are, in no particular order, my choices for some of the must watch anthology films of the horror genre. – Michael Cieslak

Trick r Treat (2007)
This is an annual watch in our household, quite often taking pride of place as the movie we watch on Halloween. This cult classic features five interwoven storylines centered around the importance of following the traditions of Halloween, and of course, the delightfully cute and equally dangerous Sam. The stories include an introduction piece, a cautionary tale about overindulgence, a classic “kids died here years ago” tale perfect for a campfire telling, a surprise party, and Sam’s big finale against a Halloween Scrooge. Trick r Treat has a great rewatch value as the viewer can see just how closely connected the stories are. While more of a horror/comedy, Trick r Treat has more than enough scares for your night’s watch.

Creepshow (1982)
Two words: meteor shit.
If you prefer, four words: Stephen King, George Romero.
OK, maybe a few words. Creepshow is a campy and humorous horror romp in the vein of the titular EC comic. There are five stories, counting the prologue/epilogue featuring the acting talents of Hal Holbrook, Adrienne Barbeau, Leslie Nielsen, Ed Harris, Ted Danson, and Stephen King himself, among others. Each features the classic “gotcha” comeuppance ending that the EC horror line was known for. If you are a fan of TV’s Tales from the Crypt you’ll be a fan of this flick. Bonus trivia: Billy, the boy whose father yells at him for wasting time reading comics was played by King’s son and noted horror author Joe Hill.

Trilogy of Terror (1975)
Speaking of television, Trilogy of Terror isa made for TV movie starring Karen Black in multiple roles — 4 roles in 3 stories, to be exact. All three stories are based on works by Richard Matheson who also wrote the screenplay for the third piece. The first two stories, “Julie” and “Millicent and Therese” are entertaining and feature disturbing themes including date rape, revenge, incest, and mental illness. The real star of the collection, however, is “Amelia” where Black’s character is attacked by a Zuni fetish doll. Yes, the iconic Zuni fetish doll.

Tales from the Hood (1995)
As much as I love the other films in this list, Tales from the Hood may have the best framing segment of any anthology film ever. Clarence Williams III steals the show as Mr. Simms, the owner of a mortuary who has happened upon some narcotics. When a trio of young men arrive to buy them, Simms tells them the stories of the mortuary’s inhabitants. Tales covers a number of important societal topics while still providing the scares. Again, fans of EC Comics and Tales From The Crypt will appreciate the endings of each vignette.

V/H/S/2 (2013)
Found footage films live and die on the believability of the premise for why the characters have a camera on at all times. Using a collection of found VHS tapes is a clever conceit used by V/H/S series of films. While the first is OK, the sequel has superior stories to tell. These include the framing device in which two private investigators discover a number of tapes and watch a few of them. The stories include ghosts, zombies, aliens, and a truly creepy cult.

The Amicus anthologies (various)
Yes, this is a total cheat, but hey, it’s my list. I’ll cram a bunch of movies all into one category if I want to. While Hammer is (rightfully) the first production one thinks of when discussing British horror, Amicus made some amazing films as well. This includes a number of anthology collections including Dr. Terror’s House of Horrors (1965), Torture Garden (1967), The House That Dripped Blood (1971), Tales from the Crypt (1972), Asylum (1972), Vault of Horror (1973), and From Beyond the Grave (1974). Each film has four to six stories and features the acting talents of Christopher Lee, Peter Cushing, and a host of other amazing British actors (including both Jon Pertwee and Tom Baker before they stepped into the TARDIS). Three of the films were written by Psycho author, Robert Bloch.

Dead of Night (1945)
The classic which all other horror anthologies owe at least a nod of appreciation. An architect who suffers from terrible dreams drives out to a country estate where there is the possibility of work. There he discovers a number of people he has never met, but whom he knows from his dreams. With a growing sense of dread, he knows that something horrible will happen that night, but does not know what. The others in attendance take turns telling their own stories, the highlight of which is “The Ventriloquist’s Dummy.”

Cat’s Eye (1985) If you are looking for short stories, look no further than the King himself. This film includes three of Stephen King’s works, two from his collection Nightshift (“Quitters, Inc” and “The Ledge”) and “General” which is original to this film. The interesting framing device is that the stories are told from a cat’s perspective. Body Bags (1993) Kudos to John Carpenter for this jug of lemonade made from the lemons of a canceled television series. The stories are ok, the third segment “Eye” featuring Mark Hamill is the best by far, but what you are really tuning in for are the celebrity appearances and director Carpenter himself as the Coroner in the connecting pieces. 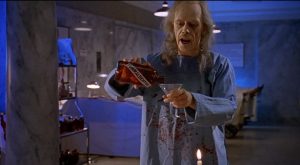 Kwaidan (1965) This film is stunningly gorgeous. The visuals alone are well worth the watch, but the Japanese folk tales/ghost stories. Masaki Kobayashi’s use of color is well worth the price of admission and the stories told will haunt you long after you turn out the lights.

Unheimliche Geschichten (1919) Possibly the first horror anthology. Conrad Veidt, Anita Berber, and Reinhold Schünzel portray multiple roles, including (respectively) Death, The Harlot, and The Devil. These three-step out of paintings in a closed book store to tell each other tales which include adaptations of works by Edgar Allan Poe and Robert Louis Stevenson. While the title translates as “Uncanny Stories,” of note to GLAHW members is the English title the film was released under internationally: Eerie Tales.