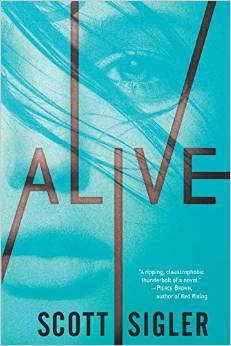 Disclaimer: This is a review of a book which I received as a free ARC.

Two things happen when you filter something like The Hunger Games through the mind of horror/sci-fi author Scott Sigler? The first thing is that you get the Alive. The second is that you, as a reader, are in for a wild ride.

This is going to be a difficult review to write. There are so many amazing twists and turns, fantastic reveals, and other inventive plot points that I don’t want to give away. To do so would rob future readers of the chance to encounter these things for themselves. However, to avoid all of them would reduce this review to “It was really well written and I like it a lot.” I will do my best to walk the tightrope between review and spoiler.

Alive starts with the main character waking, trapped in a coffin with no idea how she got there, where she is, or even who she is. All she knows it that she is 12 years old and it is her birthday. Her knowledge is vague at best. She can identify some things, but lacks the words for others. She has a strong feeling that her parents loved her, but can not recall their names or faces.

She soon encounters other who are experiencing the same symptoms. They two have little to no memories of their lives before waking up. They too think they are 12, despite looking much older. Some become allies, others…

What follows is a series of horrific discoveries which the characters must deal with while trying testing the dual boundaries of their own knowledge and their mistrust of one another. They are attacked by animals, mutants, and each other.

Sigler does an amazing job of keeping both the characters and the readers in the dark. As some clues are revealed, the reader begins to make assumptions about where they are, some of which may be true. The author also illustrates how quickly social strata are formed and the dangers of schisms which result from such divisions.

Alive is a equal parts thriller, mystery, and science-fiction story. It is another fine creation from a very talented author.