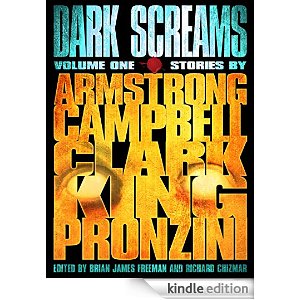 Dark Screams: Volume One A Review

There are benefits to being, as my current bio states, “a lifetime reader and writer of dark speculative fiction.”  One of these is occasionally being able to capitalize on the horror network and be part of something really cool.  This review is a prime example of this.  I recently received an e-mail asking if I would be interested in reading a new anthology of horror fiction edited by Brian James Freeman and Richard Chizmar.

Naturally, I jumped at the chance.  I am a lifetime subscriber to Cemetery Dance magazine and have enjoyed many of the books published by Cemetery Dance Press.  I have enjoyed Freeman’s fiction and think that Chizmar is one of the best editors working today.

Consider that your official disclaimer.  Yes, I received a free copy of the e-book.  By reviewing Dark Screams: Volume One I become eligible to repeat the process with Volume Two.  However, this in no way affects my ability to review the collection or to post a negative review, should the text warrant it.

Fortunately, the text doesn’t warrant it.  I thoroughly enjoyed Dark Screams and look forward to future publications.  The authors whose work appears in this volume include some of the greats of horror and suspense fiction: Stephen King, Kelley Armstrong, Bill Pronzini, Simon Clark, and Ramsey Campbell.  Those looking for ghosts and demons may be bit disappointed as the stories in this volume, for the most part, produce their scares without resorting to the supernatural.  I will give a brief, hopefully spoiler-free, overview of these works.

“Weeds” by Stephen King
Every good horror fan is familiar with this tale, the second story from the film Creepshow featuring the acting talents of the author.  One tends to remember the slightly off beat cinematic version, which is a shame.  The story of Jordy Verrill’s encounter with a meteor and the unfortunate results is a prime example of body horror which still stands up almost four decades after its original publication.

“The Price You Pay” by Kelley Armstrong
This is a tight, taut, story of obsession, revenge, and release.  Armstrong creates a claustrophobic atmosphere which locks the reader in place.  Each successive reveal enlightens and enrages the reader.  The ending is extremely satisfying.

“Magic Eyes” by Bill Pronzini
One of the highlights of this story is the use of the epistemological method by which the story is told.  We are reading the journal of a patient who has been committed to an institution after being convicted of murdering his wife.  At first the posts are written from the slightly paranoid viewpoint of one trying to antagonize his therapist.  As the story continues, the reader gets a better view of the writer’s motivations.

“Murder in Chains” by Bill Pronzini
What would you do if you woke up chained to a hulking murderer?  How far would you go to save the life of a stranger, or your own self?  Pronzini explores these questions in this suspenseful short.

“The Watched” by Ramsey Campbell
This is my favorite story in this collection (followed closely by “The Price You Pay”).  Campbell tells the story of a young boy pressed into service by an obsessive authority figure, forced into participating in surveillance and information gathering that would paralyze an adult.  I will admit, there was one scene which caused me to bark out with inappropriate laughter.  This brief release was immediately followed by an expertly crafted building of tension which continues through the end of the story.