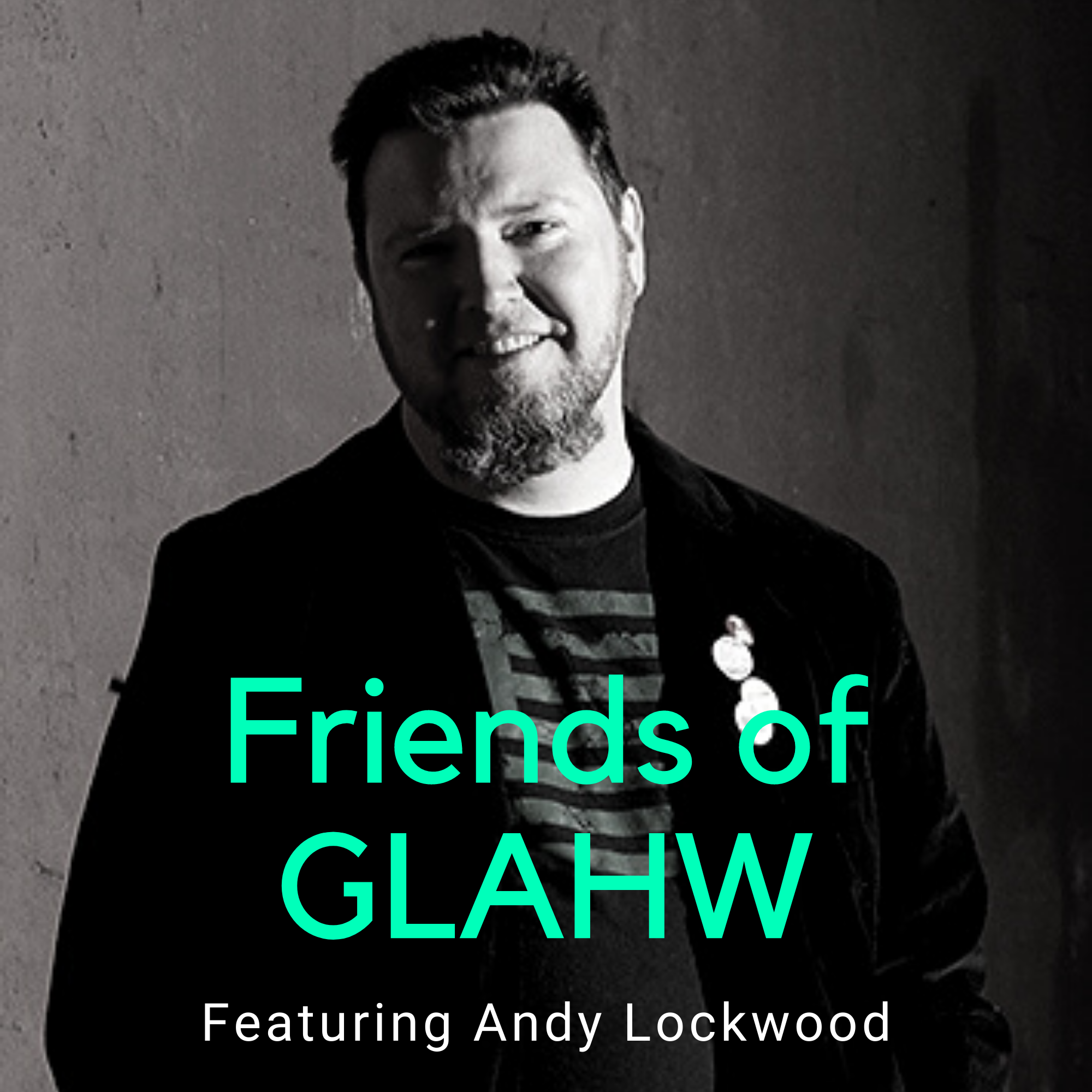 We here at GLAHW have met so many amazing and talented people out in the big wide world (you know, OFF the internets) and thought it was high-time we introduced them to you. Who knows? You may end up discovering a favorite new artist, photographer, writer, or all-around awesome human. This time around, we will be talking to Andy Lockwood.

Answer: I think I’m like a lot of writers in that I got started young. I was surrounded by inputs – tv, movies, books, comics… all those ideas filled my brain and started mixing together, producing new things until they had to find an outlet. I was always a vivid storyteller; my parents can attest to that. So yeah, from early on, but I didn’t start writing with the intent to publish until around 2007 – and then I didn’t actually publish my first manuscript until 2013.

Answer: Because it’s home. I’m a pop culture sponge, but horror is where I live. My life revolved around horror from early-early – my dad and I would watch the Monster Double Feature almost every Saturday before yard work started. My godmother enrolled me in the Stephen King Library. Even my mom – who doesn’t really like horror – introduced me to Jaws. My family always got into Halloween with costumes and decorating – as much as Christmas. It’s easy for me to reach into my past and find memories that connect to something monstrous, so I guess – choice or not – I’ve just always been here.

I’ve written a bunch of short stories over the years – all for myself. I’ve written scripts and treatments for films. I’ve even co-produced a film with a friend and fellow filmmaker, then sent it to some festivals. But in 2012, I’d never written a novel, so I decided it was finally time.
I stumbled onto NaNoWriMo (National Novel Writing Month) and got involved with NanoLansing – the Lansing chapter of the event. Honestly, everyone should get involved with a local chapter of NaNoWriMo. They’re probably the most inspired group of people I’ve ever met. I got with them and, whether it was the friendly competition or the sense of camaraderie, I finished the manuscript for my first novel that November.

Now, when you “win” and finish your word count, they give you a bunch of freebies. One of them was a coupon code for five free copies of my book printed by CreateSpace. I figured it was a vanity press, so I got some editing done, threw a cheap cover on it, and submitted the art and the manuscript to get my free copies. A couple days later, I got a confirmation email from CreateSpace saying that my copies were on their way, and congrats, my book was now on Amazon. After a panic attack, I got a better cover put on it and tried to bury the shameful first printing.

It’s been a pretty interesting ride since that rocky start.

Answer:I’m a total pantser. I don’t usually know what’s going to happen until I type it out.

Answer: Oh yes. I’ve had a couple of encounters in my life.

Answer: No, I’m not superstitious, but I appreciate a good ritual. I don’t hold my breath when I pass graveyards. I’m not afraid of ladders or umbrellas. My only issue with black cats is our kitten Void – she’s a climber, and those claws are sharp. But I toss coins out to the fairies every New Year’s Eve. I will pick up pennies – heads only – and I knock on wood.

But no, not superstitious. I don’t see the point in being afraid of things I don’t understand. Let me understand it, then I will know if I should fear it.

Answer: I’m an elearning developer. *laughs* I swear, it’s more interesting than it sounds. I come up with creative ways to present learning in online formats. It’s a little right brain, a little left brain. I get a chance to do art and combine it with some programming. It’s almost like designing video games, but nowhere near as cool. But I like doing it, and I’m pretty good at it, so until this “writer” thing starts making more money than the day job does…

Answer: I don’t have a preference. I write ideas. I’ve got a bunch of them swirling around in my head at any given time, and eventually, one of them gets loud enough and big enough that it needs out. That’s when I start writing, and I just keep writing until the story is done. I’ve tried to dictate how long a story is going to be, and they never work out how I intend. I sit down to start a novel and I finish it in eight thousand words; I get an idea for what I think is going to be a short story and it turns out to be the start of a series.
I’ve learned to let the ideas be what they want to be and just pants my way through the process.

Answer: I enjoy the average stuff: movies, video games, reading. I also draw – I do a silly little thing at all my events called Bad Drawings (by a Good Author). It’s a fun way to pass the time and it seems to give people a smile. I make t-shirts; I have a small indoor garden; I brew beer, wine, and infuse alcohols. I enjoy building things… Working on other projects allow the stories to brew. I’m not a master at any of them by any means, but it’s nice to have something to fall back on when I need a break from my routine.

Answer: Oh yes. I read, period. Like music, I think there is something in every genre to enjoy. I dabble in most genres. I flit around in YA, fantasy, non-fiction… I love reading. I like to expose myself to stories of all kinds.

Answer: I really only seem to write horror, but it’s not like I’m limiting; there are so many directions I can go. I can inject a story with laughter, romance, inspiration… I like to say that I don’t write horror; I write love stories where horrific things happen. I believe that. I have an opportunity to touch people in ways they don’t expect to encounter in a horror story. I think it adds a unique element to my writing and my stories.

Answer: No. For better or worse, that’s my name.

Answer: Whatever the genre, I think a story has to live and breathe on its own to be good. Characters need to feel authentic, like they could live on your street. Situations, however far-fetched, should still feel like they could happen. It has to be genuine – I don’t mean “based in reality.” I mean that if there’s a monster, it needs to have weight and breadth and gravity. It needs to feel like an actual threat to the reader as much as the characters. And characters need to have lives and concerns and real depth. They aren’t just vehicles for trauma and fear; they’re supposed to be people. If we don’t care about the people, we don’t care about the story.

Answer: *laughs* A lot of things. I think everyone wants to be an astronaut first. But I also wanted to be an artist. A teacher. A director. A singer. In a way, I’m all of these things, more or less, just not professionally. I express myself in a lot of ways from day to day. I’m always happy to share my knowledge with others.

Answer: Yes. Well, as much as an agnostic can be. I’ve been accused of atheism, but I’m equally skeptical that nothing is out there as something. I don’t know who is right, if anyone, so I find it better to put my faith in celestial bodies. I put my thoughts and hopes out into the universe and whoever wants to respond to them is welcome. It’s worked for me so far.

Answer: I think Matheson and Bradbury are the most brilliant authors of all time. They have a way with genre-bending that I aspire to. Their stories transcend era and time and continue to build an audience. I could cite a thousand other authors and artists, but I think it really boils down to those two as far as where it all began.

Answer: Right now, I’m reading an advance copy of Book Three in Chad Lee Erway’s Masterminds series. It’s a YA series about some kids that live in a town full of monsters. Like Scooby Doo meets Goosebumps. They get in over their heads and solve crimes and battle monsters – not all of the monsters are bad, either. What I really love about it is that it’s accessible horror for a younger crowd. Something for kids to cut their teeth on, but it’s good stuff. Kids can read it and enjoy it, but I’m reading it and loving it, too. Chad’s got a way about his writing. He can call to that kid inside all of us. He makes you feel like you’re one of the Masterminds, whatever your age.

Answer: At pretty much every event, you can count on there being one person who says, “Oh, I wish I could be an author.” So, all the people who think that, say that, this is what I want you to know: You can be. The difference between you and me is the same difference between me and Stephen King… it’s all time at the keyboard. If you want to be an author, you need to sit down and write. There’s no way around that. If you can’t take the time, you’re always going to wish. You’ve got to put in the miles to get the words down and get good at finding your voice.

It’s not easy. There are days when I’d rather do other things, and days that I do. But the stories don’t get out that way.

Speaking of stories getting out – Threshold, my fourth novel, came out on May 1st.