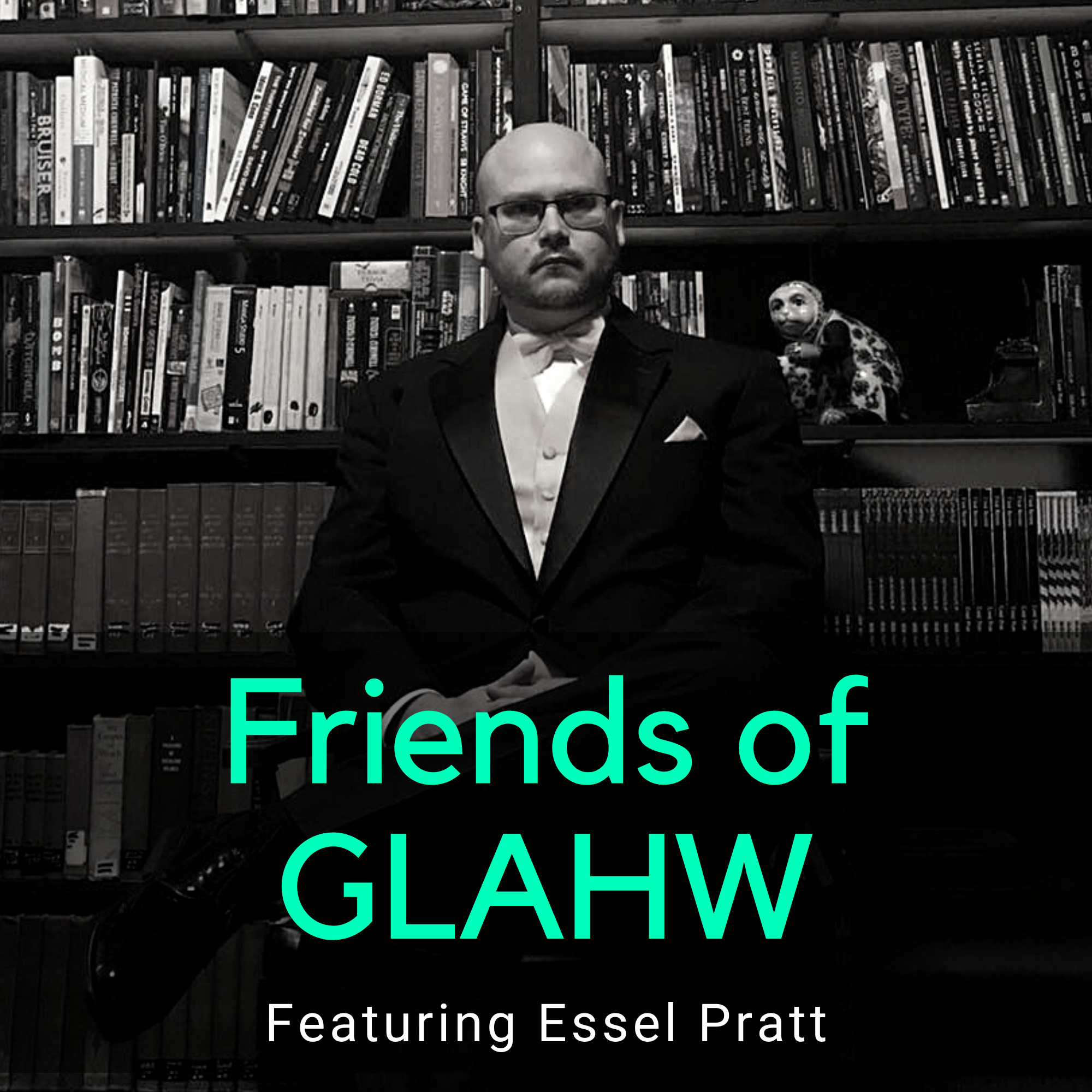 We here at GLAHW have met so many amazing and talented people out in the big wide world (you know, OFF the internets) and thought it was high-time we introduced them to you. Who knows? You may end up discovering a favorite new artist, photographer, writer, or all-around awesome human. This time around, we will be talking to Essel Pratt.

Essel Pratt: I’ve been writing seriously since about 2014. However, since I was little, I’ve jotted down stories. Nearly all the stories from when I was little has been long gone. But, every so often one of them comes back to me and I write the concept down in case I want to revisit it.

Essel Pratt: I think the horror genre came naturally to me. My parents never really shielded me from horror movies when I was little, so it was just normal to me. Rather than be frightened by the genre, I was able to distinguish it from reality. As I grew older and started creating stories, horror just naturally integrated itself into the stories.

Essel Pratt: Making the jump to write seriously and potentially make it a career was a strange thing for me. I always wanted to, but found that anything serious I wrote was never finished.  It wasn’t until I gained the courage to start adding authors as friends on Facebook back in 2014 that I gained the courage to actually finish a story and submit it for publishing. I am not sure I can call out any specific writers that inspired me. However, the Indie scene of the mid-2010’s as a whole was inspiring. I made some great friends in the community during that time and collectively they inspired me to move forward.

Essel Pratt: I’d say that it depends. When I am writing a short story, I am a panster. I often have no idea where the story might take me, other than a few vague writing prompts. So, I just let the story write itself. However, if I am writing a novella or novel, I tend to plot it out chapter by chapter. Then, as I begin writing, I adjust as the story deems necessary.

Essel Pratt: I believe so. I can remember walking into the kitchen of a house we lived in when I was little, probably around first or second grade, and I saw my grandma washing dishes. It wasn’t scary and I was oddly comforted by the presence. Unfortunately, my grandma had passed away long before that experience.

Essel Pratt: I wouldn’t say I am superstitious, per se. Maybe I was at one time, but as I’ve gotten older, I have veered toward believing that things just happen for a reason.  We may not always know the reason, but it’s there somewhere.

Essel Pratt: Outside of Writing I am a Director of IT Operations. Someday I may write an IT Themed horror novel.  I am also a full-time doctoral student, hoping to achieve my PhD in Psychology in the future.

Essel Pratt: I tried once, but I kept forgetting about it. A couple years ago, I thought I’d revisit it in a roundabout way by writing a poem each day that represented something significant that happened that day. But, as with the journal, other things in life got in the way.  I may revisit that technique though.

Essel Pratt: I don’t have a preference for any in particular. Short stories are where I got my start. Currently, I have over 150 published short stories. Over the last year I’ve veered toward writing novellas/novels, with 24 books currently published. One of my books is poetry. I’ve not ventured into script-writing yet, but want to someday.

Essel Pratt: Growing up watching horror since I was in diapers, I don’t find a lot to be scary. However, the thought that one of my children or wife being hurt is frightening. Nearly a year ago, my youngest child (19 at the time) and I were at the local mall and witnessed a man being shot and killed just six feet in front of us. As we ran, not sure if it was a targeted shooting or a mass-shooting event, my only thought was my child being harmed. I was more terrified for their safety than anything else.

Essel Pratt: Other than writing, of course, I enjoy watching movies, drawing, and working in my yard.

Essel Pratt: I don’t believe in restricting myself to any particular genre. Horror can be found in all of them, in my mind. I recently re-read all the books in the Chronicles of Narnia and am currently reading C.S. Lewis’ space trilogy. I’ve also read The Testaments by Margaret Atwood, both books in the Alize in Wonderland series, and plan on reading all 12 of the Wizard of Oz books next.

Essel Pratt: Horror is my favorite genre to write because there are very few restrictions. However, Fantasy is nearly a tie.

Essel Pratt: I do. Essel is actually a combination of my first and middle initials; “S” and “L”. When I started submitting for publishing, I quickly found that there was already a prominent author with the name Scott Pratt, so I was going to use S. L. Pratt, but when I’d say it out loud, it naturally became Essel.

Essel Pratt: For me, a good story is anything that draws me into the atmosphere and surroundings and makes me care about the characters, whether they are good or evil.

Essel Pratt: I was all over the place with future career goals when I was a child. I wanted to be an illustrator at Disney, an inventor (although I did not have any inventions in mind), a comic book creator, and so much more. Although I didn’t know exactly what I wanted to be, I knew I wanted to be something that uses my imagination.

Essel Pratt: Not in the least bit. Growing up, spirituality was never a concept in our household. Although I may delve into it from time to time in my writing, spirituality isn’t something I cling to.

Essel Pratt: Two of my influences are C.S. Lewis and Clive Barker. There is something about their writing that drags me in every time.

Essel Pratt: Other than the books I mentioned above, I am also reading Light of the Jedi by Charles Soule and am loving it.

Essel Pratt: I’m always working on a new book, it seems. Currently, I’m about half-way through writing the third book in the Sharkantula series, titled Humantula, and I’m also writing a book loosely based on my late cat Sakima.  It is sort of similar to stories like A Dog’s Life, but about a cat and written from his point of view. I also just finished the third book in the Reaper Saga that should be released very soon.