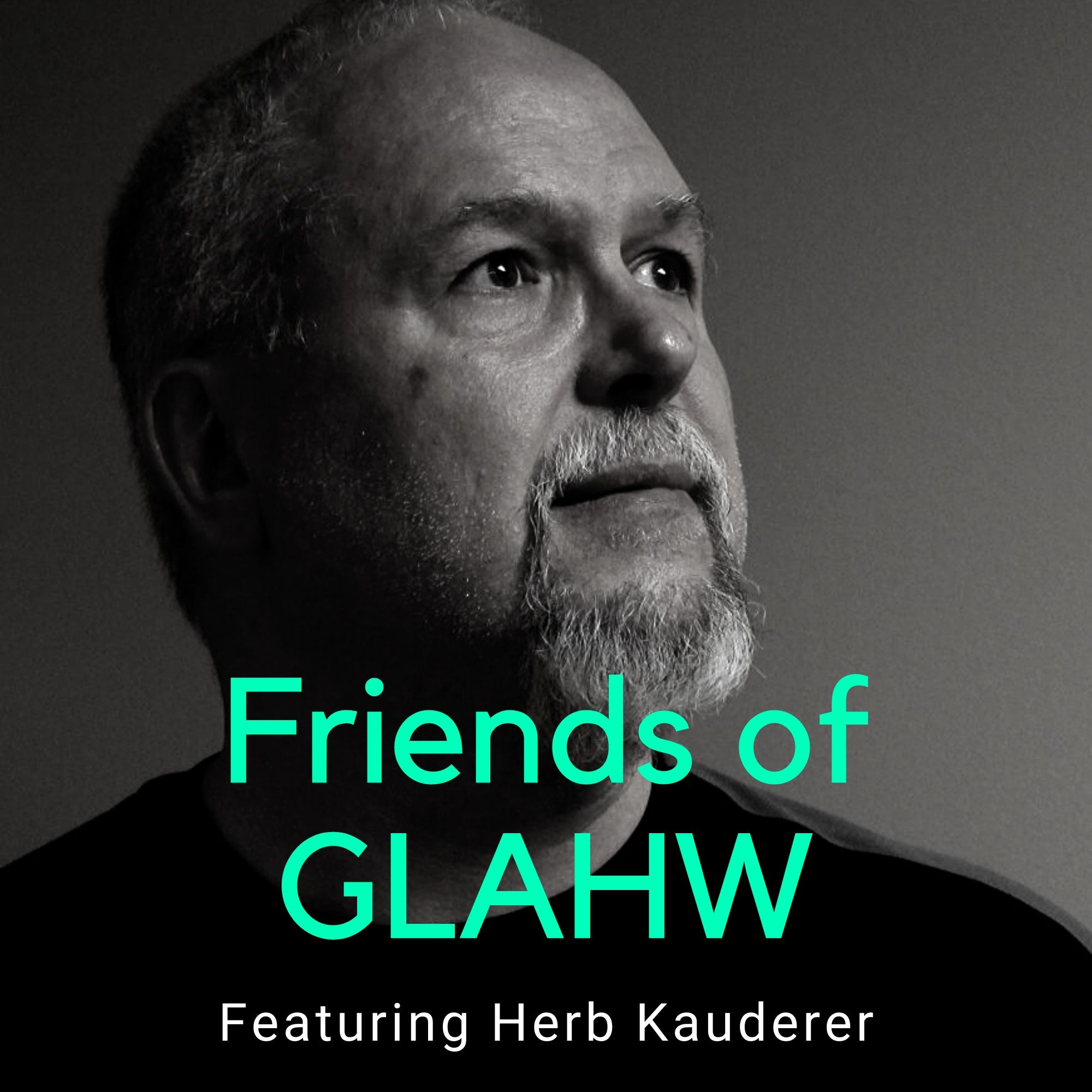 We here at GLAHW have met so many amazing and talented people out in the big wide world (you know, OFF the Internet) and thought it was high-time we introduced them to you. Who knows? You may end up discovering a favorite new artist, photographer, writer, or all-around awesome human. This time around, we will be talking to Herb Kauderer.

Here is his Bio:

Herb Kauderer is a member of GLAHW and HWA.  He writes primarily at shorter lengths.  His writing has won an Asimov’s Readers Award among other accolades and has been nominated for many other honors.  Recent horror books include ‘Fragments from the Book of the After-Dead’ (2019 Poet’s Haven Press) and ‘Pocket Full of Horror’ (2017 Written Image Press).

Answer: I started creative writing at the age of eight, shortly after I learned (at that rather late age) how to read.  By junior high school I was a regular in the school newspaper and that continued through high school where I was often the sports editor.  I haven’t checked, but it’s entirely possible I have had something in print every year since I turned eleven in 1970.  (Or perhaps since college – 1978.)  I am not the sort of person who still has his high school newspapers.

Answer:I think it chose me.  Or perhaps it was subconscious.  Around 1994 a horror magazine asked to interview me.  I asked why?  They said regarding my horror poetry.  I thought to myself, ‘I write horror poetry?’, but I answered, “certainly” and did the interview.

Three of my favorite things to write about are ghosts, nightmares, and insanity, but my style had little to do with the sorts of things my friends referred to as horror.  Of course horror, like humor and romance, is a genre defined by the emotion it evokes.  I had not considered up until that point that horror came in many flavors just as humor and romance did.  With my blinders removed I recognized that I very much like some flavors of horror, and find others yawn inducing.

Answer:The discovery of a copy of Ellery Queen’s Mystery Magazine for sale around 1974 was the provocation for my move to fiction.  The magazine was almost nothing like the EQ novels.  The issue had all sorts of different stories including suspense and non-gory horror.  I was hooked.  The idea of writing interesting (rather than literary) genre stories for adults was irresistible.  I still have forty years of EQMM in the kitchen.  Good cooking.

Answer:I am ambidextrous in this matter.  I can be seized by a feeling or image and swoop in.  I have an MFA in Screenwriting where they taught extremely rigid plotting.  Sometimes I do that.  More often the first.  Pre-plotting is better for hitting a deadline, but I don’t have a lot of writing deadlines.

Answer:I attended Goddard College in Vermont whose campus has a rich tradition for being haunted.  The original farm that became the school grounds was owned by relatives of Susannah Martin, who was hung as a witch near Salem in 1692.  In fact, the Garden House overlooking the rose garden includes exposed beams repurposed from the courthouse in which Susannah was sentenced.  I spent many hours there and as much as the rose garden, I admired the building and its gargoyle-heads hung throughout, including on those beams.

Given the isolated and nearly rural nature of the campus, doors are rarely locked.  So one night in 2006 two friends and I decided to go on a ghost hunt.  Donna had a powerful flashlight, and since she was a retired police officer we were happy for her to be in charge.  We crept into the Manor building at three o’clock in the morning, each armed with a bottle of beer.  They were the not the first bottles of the evening.

The building itself was a proper eighteenth century manor house changed little in its conversion to classrooms.  The second floor held two staircases up to a full-sized attic.  We found the attic door at the top of one solidly locked, but George found that the other had a chain that allowed it to open two inches.  Shining the light inside revealed trash, including a dusty old doll whose eyes still shone in the light from the flashlight.  Creepy, but hardly supernatural.

Soon, I had to answer nature’s call, so I went to the ‘green room’ on the second floor, so named for the wall tile imbued with swirls of green, probably dating from a 1960’s-era remodeling.  While I was standing before the commode doing my business, I got a very different feeling.  Hair on my neck and arms visibly stood up and tingled, and a silent pressure in the air seemed to rise.  I was sure this was my supernatural encounter!  The pressure built to a crescendo, and then the left light fixture flickered, and audibly went dark.

I paused waiting for the next manifestation, but there was nothing.  Out loud I said rather loudly, “that’s it?  That’s all you’ve got for me?  An intermittent electrical short?”  All the silent pressure left the room with an inaudible gasp.  I finished my business, washed my hands, and went and told my friends the story.  We checked and the light was still dark, and the next day it was not.

I’m pretty sure my insensitive response offended away any possible future supernatural encounters.  I recommend to others on ghost hunts not to keep your standards too high.  Some ghosts may be easily offended or frightened.

Answer:No.  My very full life has taught me that good and bad happen without influence from any of my attempts at swaying them.

Answer:I’m an English professor at Hilbert College in Hamburg, New York.  (Near Buffalo.)  And in the fall semester of even numbered years I teach a junior level course titled The Literature of Horror.

Answer:No.  I’ve had years of doing that.  Currently, I write and read every day, but not necessarily using a journal.

Answer:Literary readings, SF conventions, games and gaming, the MCU on television as well as in the cinema.  I occasionally visit the Society for Creative Anachronism.  I like to take day trips to interesting places.  I list three particular and unusual hobbies that fit in with these:

Answer:Right.  Yeah.  How to answer that.  I read stupid lots across the board.  I have seven college degrees including psychology, sociology, political science, and a PhD in Transnational Studies.  So I read a lot of non-fiction and science, as well as horror, SF, mystery, detective, humor, and historical fiction.

Answer: A good story makes me want to keep turning the page.  One way to do that is to introduce a character early on who wants something, but can’t get it for some reason.

Answer:I wanted to be a writer and/or English teacher.  I became a writer quickly.  But I spent two decades employed in factories and occasionally driving trucks before I became an English professor when I was thirty-nine.

Answer:In the sense of placing high value on the human spirit, and believing that sentience and symbolic language are magical, yes.

Answer:I just finished ‘Influence of the Moon,’ an anthology with plenty of horror, but also SF, fantasy, and humor.  I was actually recording male-voiced narratives for the audio book.  Next to my reading chair are two in-progress mainstream poetry collections, ‘Notes of a Dread-Headed Drifter’ by Jeffrey-Paul Horn, and ‘Shoot the Alligators Closest to the Boat’ by Nathanael Stolte.  Also a copy of Scifaikuest.  After that I plan to read the first three volumes of ‘A Flash of Dark’ edited by Scott W. Williams.

That list is influenced by my being on Spring Break.  In a week, a lot more non-fiction will invade the list.  In April I’ll be giving an academic presentation on Quebec’s Quiet Revolution, so I’ll probably be reading a lot about that to be prepared for the question period.

Answer:I have driven tractor trailers, but I was never good at it.  I was a competitive athlete until I was fifty, and I will still hit a tennis ball now and then.  Or shoot hoops, though my incompetence in that area is awe-inspiring.

For its entire history I was a regular at EerieCon, and one year Brian Lumley came to my (atypically well attended) poetry reading and had kind words afterwards.  I am often dazzled at how many famous people this blue-collar kid has gotten to talk to.  I’ve had good fortune, and been in good locations for these things to happen.

The last few years I have been a slush reader for Amazing Stories.  I also read for R.cv.r.y. Quarterly Literary Journal.  I love to see my writing students published.  Two have had poetry collections published in the last few years, Brittany Lisa Carey, and Brynn Phynix Biesik.

I lived at ground zero for two of the biggest blizzards in the lower forty-eight states.  I wrote a book of prose, poetry, and photographs of the second event titled ‘The Snowstorm of ‘14’.  To my utter astonishment, it debuted at number two on Kobo’s list of best-selling American poetry, and hit number one in week two.  I blame this on my many Canadian friends.  Who else wants to read about snow?