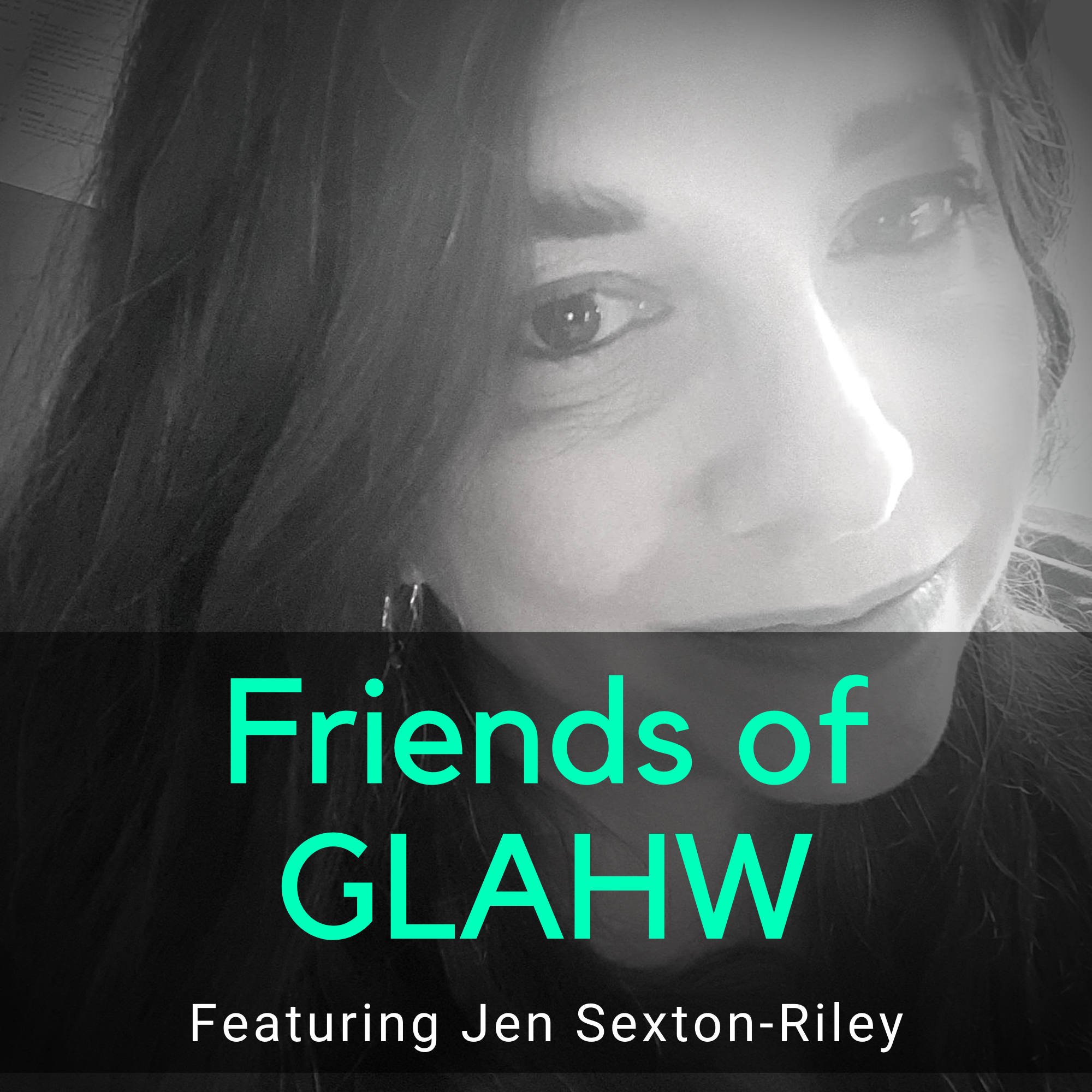 We here at GLAHW have met so many amazing and talented people out in the big wide world (you know, OFF the internets) and thought it was high-time we introduced them to you. Who knows? You may end up discovering a favorite new artist, photographer, writer, or all-around awesome human. This time around, we will be talking to Jen Sexton-Riley.

GLAHW: How long have you been writing? When did you get started? I’ve always loved to invent stories and characters. I won a writing contest in high school, a poetry and prose contest in which I entered both and won first place and second place of the two categories. That felt pretty good. I never really stopped after that. I published for the first time at 25 in a literary magazine. It was a poem called “Stimpy” about a dead cat I found on a bike ride in Seattle. Soon after I lucked my way into writing my first newspaper movie review, and one thing led to another.

GLAHW: Why did you choose the horror genre? What could be better than inventing monsters? As a small kid I terrorized the other neighborhood children with stories of seeing ghosts floating in and out of their chimneys at night. I’d lead them on elaborate adventures through the woods and countryside of Eden, New York inventing explanations for any random objects we’d happen upon, from strange rituals to alien visitations to portals to other dimensions. I think I caused a few sleepless nights, and parents probably weren’t especially fond of me. Horror and dark fantasy have always been my favorite–the intermittently empathetic monster, the discovery of previously unknown horrors within, haunted objects, hidden portals to other worlds. I love it all.

GLAHW: Were you inspired by a person or event to begin your writing career? When I was pretty small I read a children’s book which became a favorite, “The Witch Family” by Eleanor Estes. I found it in the elementary school library. In the book, a little girl writes a letter to a witch and leaves it on the outside sill of her window, where it is picked up by a cardinal and delivered. I wrote a few letters of my own to various witches, folded them up and tucked them under the sill outside my second floor bedroom window. When the notes kept disappearing, I guess I realized writing has magic in it.

GLAHW: Are you a Plotter or Pantser? Former pantser, now dedicated and obsessive plotter who creates a detailed road map from beginning to end and then relapses and pantses my way from point A to B to C all the way through. It works.

GLAHW: Have you ever had an encounter with the supernatural? I have. Strangely enough, I tend to distrust people who claim a lot of experience with ghosts and so forth despite the fact that I’ve experienced unexplained things of this nature. I do believe in the existence of the (hitherto) unexplained. I just don’t necessarily believe everyone who claims to have experienced it.

GLAHW: Are you superstitious? Why or why not? My impulse is to say no, but I often find myself mumbling little magic words under my breath or clutching some kind of little charm or other. I have something I say when I’m searching for a parking space and something else I say when I’m opening email responses to stories I’ve submitted for publication. I don’t live my life according to superstition or magic words, but I’ve done these things since I was small, and I find them soothing when things are hanging in the balance.

GLAHW:  What do you do for a living, outside of writing? All I do is write. My day job secret identity is art columnist, feature writer and proofreader at an indie weekly newspaper. I also do freelance writing for various other publications and organizations when the opportunity arises.

GLAHW: Do you keep a journal every day? I absolutely do. I get in trouble when I try to pants my life. I need to plot.

GLAHW: What do you prefer to write – short stories, poetry, novels, scripts, etc.? I like writing everything. My favorite thing to write is the thing that’s clamoring in my head, demanding to be let out.

GLAHW: What truly scares you? Oof, scary question. (mumbles various magic words and makes obscure gestures) What scares me is losing my loved ones or seeing them in fear or pain and not being able to stop it. Random misfortunes. Disease. Violence. Inadvertently stumbling over the dark side of human nature. To a lesser degree, heights. Sharks. Necrotizing fasciitis. Aneurysms. Bad drivers.

GLAHW: What sort of hobbies are you into? What I do for a living and my hobbies kind of blur together. I’ll have to say the obvious: writing. Reading. Daydreaming. I also love making visual art, and making little films. I love watching movies and great television (Haunting of Hill House and Haunting of Bly Manor are some favorites right now.) I love music. I love going on adventures, discovering new places, travel. Finding new bookstores and coffee shops and restaurants and libraries. Swimming. Horses. Swimming with horses. Spending time with animals in general. I like to make clothing, costumes, masks. I love to cook. I love a great conversation. I love listening to a great storyteller. I love discovering something hilarious. I love staring into a fire. I could go on all day.

GLAHW: Do you read outside of the horror genre? If so, what else have you read? I read a lot, and not just horror. I read a lot of literary fiction, poetry, essays, different mainstream fiction when it captures my attention, and speculative fiction of course. I love dark fantasy and weird fiction. I also read a lot of nonfiction.

GLAHW: What’s your favorite genre to write? Depends on my mood, but usually dark fantasy. Often with an element of humor. And of course horror, science fiction. Sometimes memoir-ish work, usually with humor. And I do go through frequent poetry phases.

GLAHW: Do you use a pseudonym? Other than Dear Agony? I certainly have in the past. At one point I was undercover as a Canadian, writing scholarly articles for a database under the name Solange Tremblay. My newspaper alias (for April Fools articles, fake letters to the editor and the like) is Rex T. Jefferson. Don’t tell my boss.

GLAHW: What do you think makes a good story? A good story needs to capture the reader quickly and engage them, get them invested in what will happen next. It needs to set up an expectation and either exceed or subvert that expectation, with a worthwhile emotional payoff. That doesn’t mean you like what happened, of course. Sometimes the emotional payoff is rage, or disgust, or sorrow, or fear, or a haunted feeling. Ideally the story should haunt the reader afterwards in some way. It should create a feeling in the reader which refuses to leave.

GLAHW: As a child, what did you want to do when you grew up? Oops, I misread that as what I wanted to be. I wanted to be a horse, an artist, a witch, a writer. Something that could fly, turn invisible and breathe underwater. So in terms of what I wanted to do, I guess I wanted to run fast, create things, make magic, fly and then disappear under the sea.

GLAHW: Are you spiritual? If spiritual means a belief that there is more going on here than meets the eye, yes.

GLAHW: What are your influences? I’m inspired by all sorts of things. Sometimes I’ll try to create a story with the same feeling I get while listening to a certain song. I’m inspired by stories I hear people tell about their lives. Random overheard sentences. My dreams inspire me. News stories. Writers who inspire me include Carmen Maria Machado, Kelly Link, Ted Chiang, Clive Barker, Angela Carter. There are so many. I will cringe later for forgetting someone. Or something.

GLAHW: What are you reading right now? I just went on a George Saunders bender with Lincoln in the Bardo, A Swim in a Pond in the Rain, Fox 8, Tenth of December and CivilWarLand in Bad Decline. In the horror department I am reading Vampires Never get Old, an anthology of short stories edited by Zoraida Cordova and Natalie C. Parker. I recently reread We Have Always Lived in the Castle and Haunting of Hill House, both by Shirley Jackson, and some of Clive Barker’s Books of Blood, which will always be a favorite.

GLAHW: What else do you want your readers to know? Consider here your likes and dislikes, your interests, your favorite ways to unwind — whatever comes to mind. I think I’ve already revealed too much, and now I’ll have to kill you all. Seriously– I give a lot of terrible advice as Dear Agony, but I encourage everyone in these weird times to make sure you are getting enough sleep and enjoying your life. Is there anything you could be doing to get even more sleep and enjoy your life even more? Do that. Then do it times about 7. Repeat.

Final thoughts  Please check out my story “Whatever Happened to Spider Monkey?” which was recently released in the form of an audio adaptation, complete with original score and sound effects, by sound designer J Hagenbuckle for his podcast, Cape Noir Radio Theater.  You can find it here on Soundcloud. The Damn Pandy (as we call the pandemic in my house) threw me into an update slump that desperately needs breaking, so I hope this GLAHW Questionnaire will be the impetus that makes me update all of the following:

@sextonfleur on the bird app