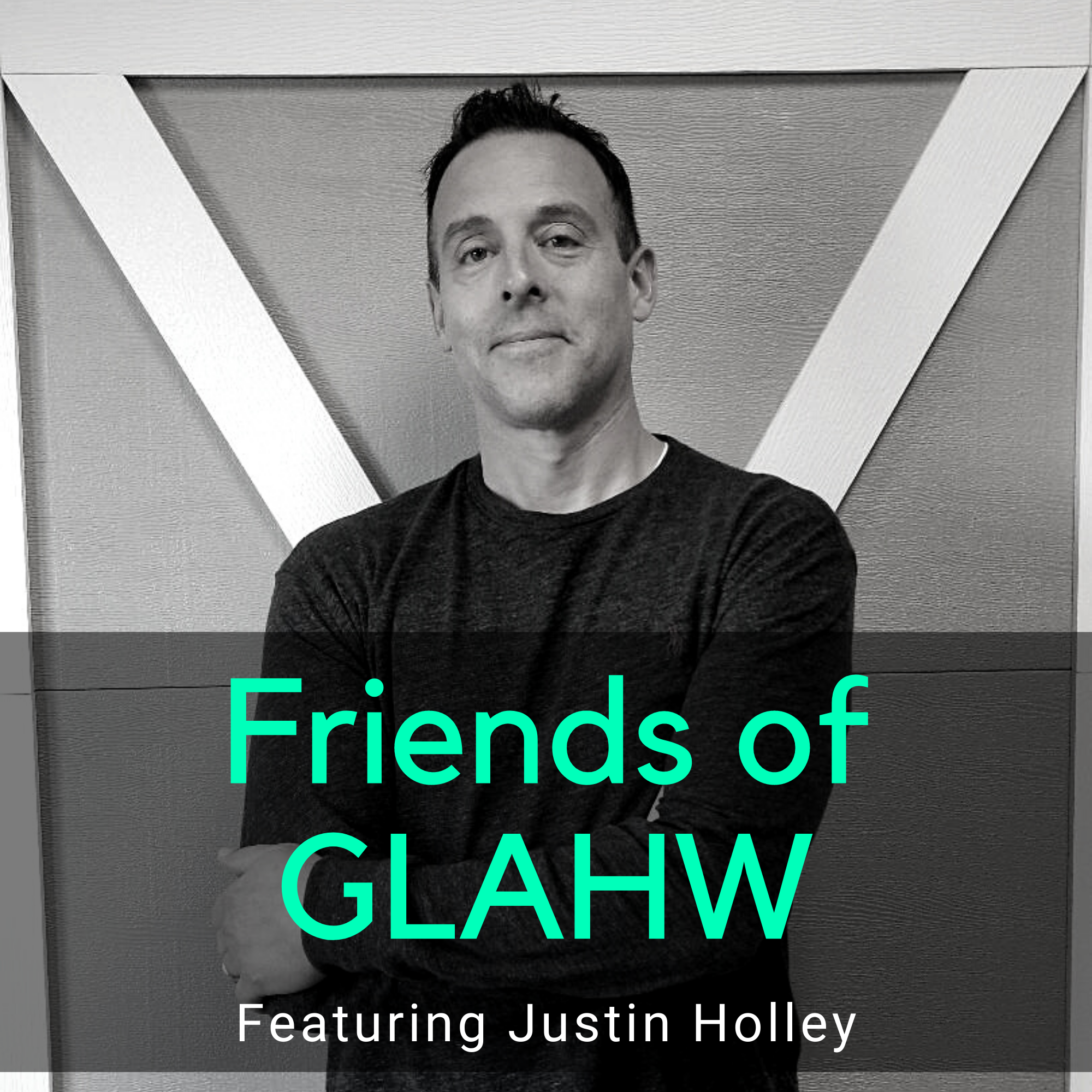 We here at GLAHW have met so many amazing and talented people out in the big wide world (you know, OFF the internets) and thought it was high-time we introduced them to you. Who knows? You may end up discovering a favorite new artist, photographer, writer, or all-around awesome human. This time around, we will be talking to Justin Holley.

I’ve dabbled at writing since childhood. A drabble here, a poem there. Then, in 2005, I sat down and wrote my first novel. I was between jobs for a month, had always wanted to, so did. It was called Broken Mirror and was not very good, but it started things off.

I cut my teeth on horror at a very young age. My mom and I watched movies like Amityville Horror, Alien, and Halloween together. Then I found books by John Coyne, Ramsey Campbell, Richard Matheson, etc. Then I gravitated to King, Ketchum, Keene, etc. So, when I decided to write, it never really occurred to me to write anything but horror.

Horror author Brian Keene was instrumental in me venturing into novels. I read his book, DARK HOLLOW, and it really moved me. I wanted to write emotional fiction like that, to capture human emotion in that same way.

Kind of a combo with this. I almost always have the ending and major plot points ironed out before I sit down to write. That said, I enjoy allowing the characters to grow organically and decide for themselves some of the situations they encounter.

Well, yes. Quite a few. I’ve investigated the paranormal with a TAPS Family group for the last decade. We haven’t been very active the last couple years, but we have investigated some cool places: Palmer House (Sauk Centre, MN, William A Irvin (Duluth, MN), The old train depot (Duluth, MN), and dozens of private residences. I’ve seen 3 full-bodied apparitions in my life. The first as a kid, the other two as an adult. I’ve also gotten some amazing photos and EVPs over the years. My two coolest photos, taken with a full-spectrum camera, were both taken in Florida. In neither case did I see anything with my eyes, but when I looked at the photos, I saw the apparitions. The first photo was of a Seminole Native American at an old sugar plantation. Amazing! The second photo was of an apparition with a peg-leg taken in the basement of the caretaker’s house at the St. Augustine lighthouse. Equally amazing photo.

Back in my baseball days, I had my pregame rituals and such. Since then, probably not so much. That said, I’m not one to test karma.

I am an HR Manager. It’s been a challenge during these Covid times, to say the least.

I’m a novelist deep in my soul. I enjoy the idea of short stories, and I’ve written fifteen or so, many published in magazines and anthologies, but they’re not my strength. There is something about the long form that lights my muse.

Extremists of any flavor scare the hell out of me. Also, spiders…ack. Oh, and clowns. Can’t fail to mention clowns.

I love playing volleyball, golf, fantasy football, and enjoy many outdoor activities. I live on the Mississippi river with access by boat to many lakes and dining/drinks opportunities…so, yeah, in the summer, the wife and I boat an awful lot.

Sure! I enjoy a good thriller sometimes. I also read some in the Romance genre, especially holiday Romance.

Definitely horror, but I co-wrote a holiday Romance with another author. We are in the midst of a second. The first is on submission. So, that’s been enjoyable.

Sharp, concise writing with 3-D characters who dictate the direction of the story. Smart, realistic dialogue is equally important. I also enjoy getting to know characters over the course of a story versus information overload at the onset. Some extreme horror scenes blended in don’t hurt either 😉

I either wanted to play pro baseball (I did make it as far as college ball) or umpire for pro baseball.

That’s a good question. I will say this…I believe in an afterlife because I’ve seen much evidence of such in my investigations. I also have certain beliefs about higher powers, but I will keep those to myself. Everyone should believe in that which they feel compelled.

I’m not sure about what, but “who” I can answer. My author influences are: Brian Keene, Richard Laymon, John Coyne, Michael Laimo, Brian Moreland, Jonathan Janz, Kealan Patrick Burke, Jack Ketchum…and I know I’m forgetting some, but those are solid.

First off, I have 4 book releases in 3 months: THE FALL (November 11th), TETHERED TO DARKNESS (November 16th), THE CAPTURE (December 14th) and THE END GAME (January 11th). I hope you all dig reading them as much as I dug writing them.

Also, I am the lead singer for a rock band called Blood Poet. We call ourselves power-punk with a modern Ramones type sound. We have seven original songs so far and plan to play live for the first time next Spring. Stay tuned 😊