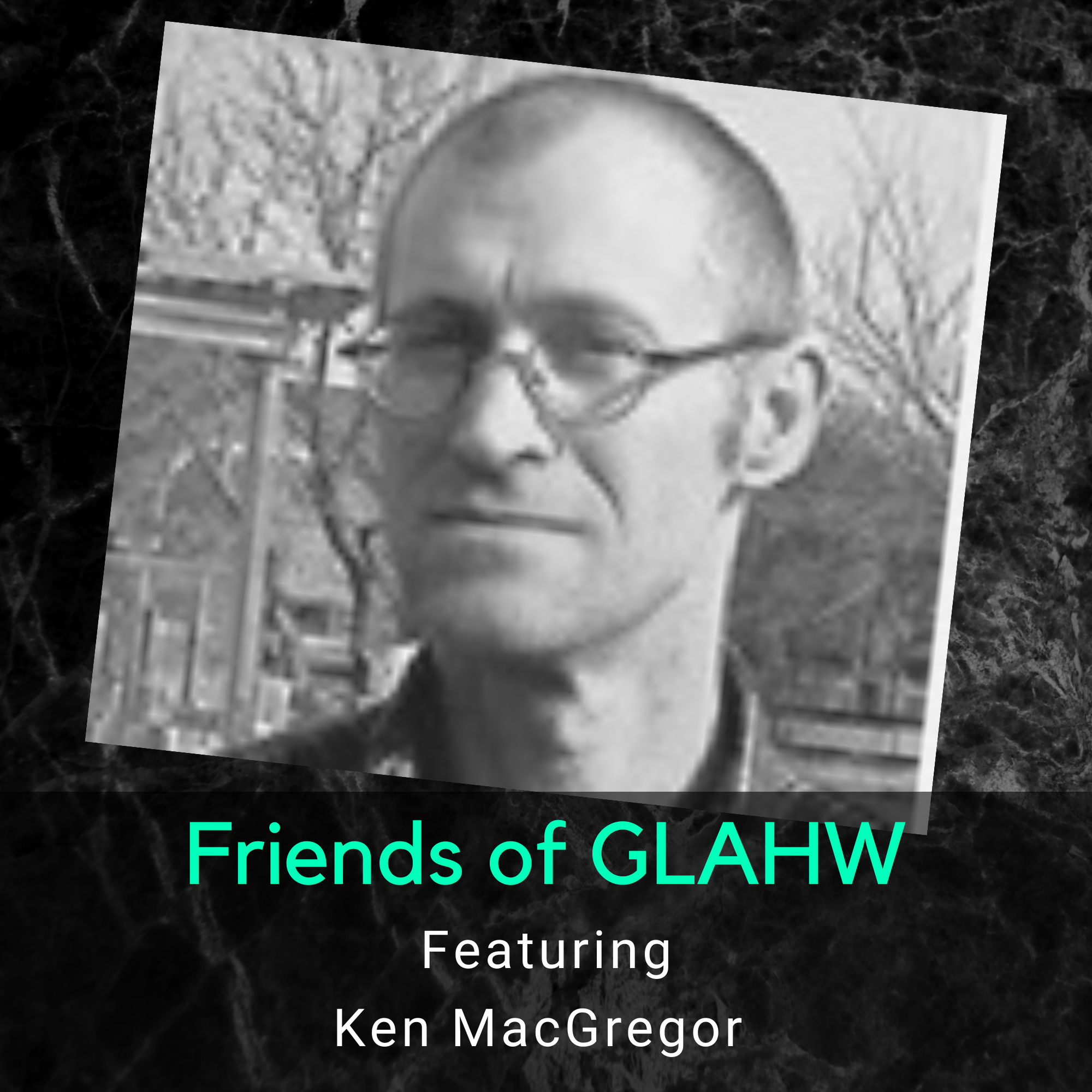 We here at GLAHW have met so many amazing and talented people out in the big wide world (you know, OFF the internets) and thought it was high-time we introduced them to you. Who knows? You may end up discovering a favorite new artist, photographer, writer, or all-around awesome human. This time around, we will be talking to Ken MacGregor.

GLAHW: How long have you been writing?

Since fourth grade, but only professionally since 2011. When did you get started? When the guy I was making movies with told me to stop sending him script after script, and put me in touch with GLAHW. No joke. This organization is the reason I broke into horror fiction.

I’ve been a horror fan since adolescence. I started watching because my mother hated horror and wouldn’t watch them with me, therefore allowing me to see lots of casual nudity without getting in trouble. However, I soon came to appreciate the films for so very much more and became a lifelong fan of the genre.

I’ve always made stuff up. The idea of getting other people to read it had a lot of appeal to me. I wrote movie scripts and sketch comedy before moving into fiction, and found that form to be my favorite. I am especially fond of the short form: I love dropping the reader smack into the middle of action, building tension quickly, and slamming home the ending, all in a scattering of pages. There’s something deeply satisfying about that.

Panster all day long. Which may help to explain why the vast majority of my work is short fiction. I struggle to plot out longer things, and, to make it work, you kind of have to. Or, at least I do.

When I was a kid, I was dead (pardon the pun) certain of it. Now, in retrospect, knowing how good of imagination I had (and seeing this reflected in my own kids), I’m dubious.

Nah. I’m far too much of a pragmatist to be superstitious.

I drive the bookmobile for my local library! It’s tangentially related to writing, really, as I’m surrounded by books. I’ve been doing it since 2007, and I still love my job.

I do not. Sometimes, I think I should. I’m slowly compiling what might become a memoir, and journaling would’ve almost certainly made that a lot easier. I have to rely on my somewhat dicey memory. Ah well.

I love short stories and flash fiction, as I mentioned above. I have written what might technically be considered poetry, and even sold some, but it’s definitely my weakest type of writing. I love the idea of being a novelist, and, in fact, did co-write one. I had a much easier time with the novella I wrote, and am working on the sequel now. I think I’m becoming more comfortable with longer fiction as time goes on, but I’ll always prefer the shorter form.

Aside from water, which is my legit phobia (don’t tell me it’s not scary: water is alive and wants to kill me, and you can’t convince me otherwise. I know, I know… why do I live in the Great Lakes state, right? Well, considering I grew up on the east coast, it’s actually kind of an improvement), the only real fear I have is losing my loved ones. This was a vague sort of thing I think we all have right up until my wife died in 2018. After that, it became a lot more visceral, a lot more real.

I don’t know that I have any hobbies, per se, these days. I enjoy playing board and card games with my kids and my partner; I love to read; I’m kind of a fanatic for exercise. But none of those are hobbies. Just aspects of my life.

GLAHW: Do you read outside of the horror genre?

Definitely! If so, what else have you read? I read all over the map. If a book is well-written, genre is irrelevant. Though, having said that, I’m not a huge fan of romance or westerns, as I find most of them formulaic. I have enjoyed one or two books in both those genres, however. You never know when you’re going to strike gold.

Horror. By leaps and bounds. I’ll tell you why: in the horror genre, you have no real limits. You can experiment, go as far as you want, push boundaries. It’s very liberating.

Believable, relatable characters, decent setting, realistic dialog, and a satisfying story arc. If I get lost in a story, and stop noticing that it’s fiction, you’re doing it right.

Actor. Actually, did it professionally for a time in St. Louis. Had an agent and everything. Then, my wife and I moved back to Michigan and it was over.

I don’t honestly know. I’m an atheist, so not in the traditional sense. However, I can get absolutely gobsmacked by a beauty of a sunset; I have wept at a finely-turned phrase in a book; a baby’s laugh makes my heart soar. So…maybe?

Growing up, I was a huge fan of Piers Anthony, Roger Zelazny, and Stephen King. As I got older, I was impacted by Clive Barker, John Carpenter and John Landis’s films, and then, even later, Neil Gaiman, Gillian Flynn, Joe R. Lansdale, and I continue to be influenced by so many fine writers today.

I AM LEGEND by Richard Matheson (trying to catch up on some of the classics I’ve never read), and AFRO PUFFS ARE THE ANTENNAE OF THE UNIVERSE by Zig Zag Claybourne (the sequel to THE BROTHERS JETSTREAM, which I just finished). Both are excellent, wildly different books.

I’ve been at this for about ten years now, and still, to this day, it fills my heart with joy whenever someone tells me they like something I wrote. Making that connection with another human being is so incredibly gratifying. I don’t think I’ll ever lose that sense of wonder. I certainly hope not.