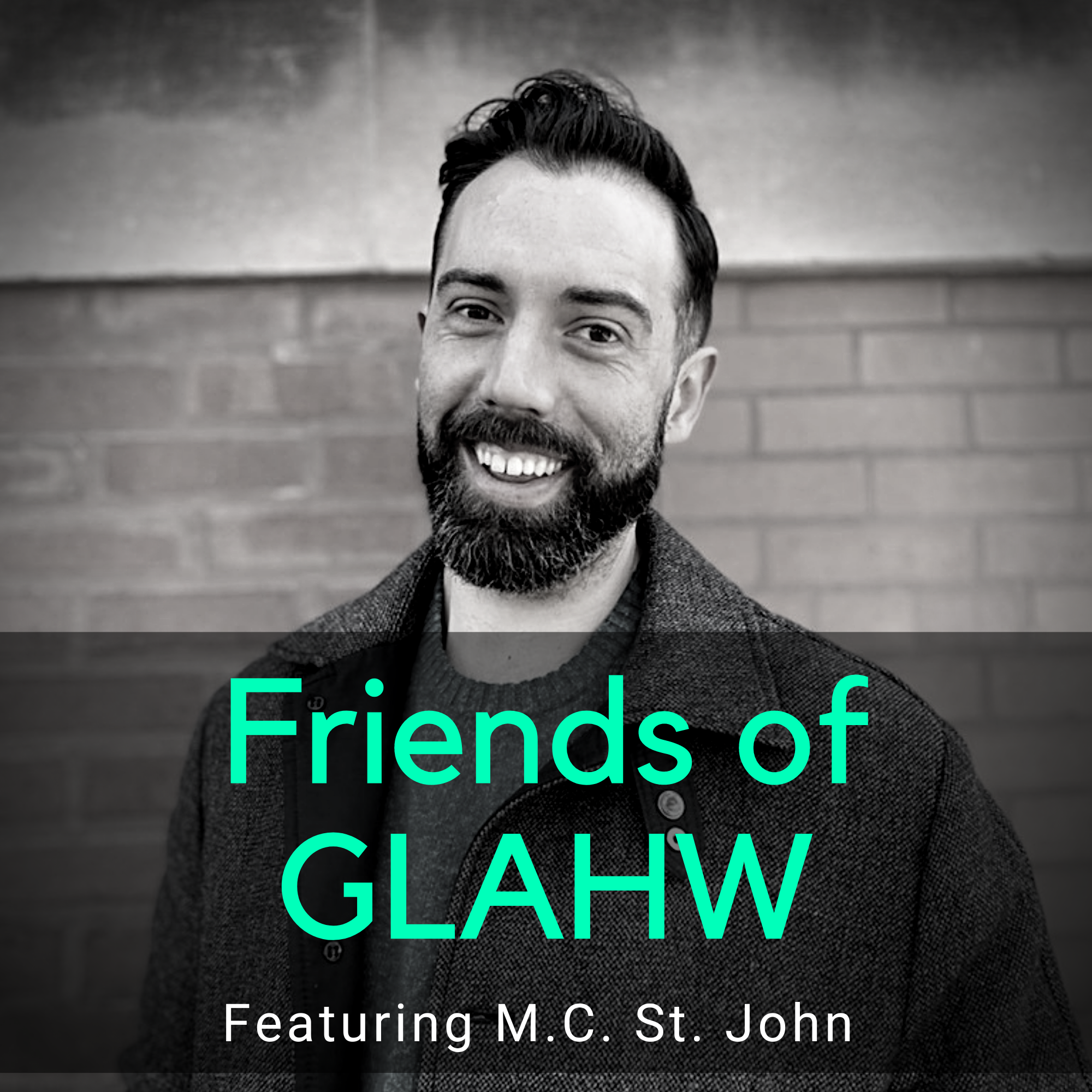 We here at GLAHW have met so many amazing and talented people out in the big wide world (you know, OFF the internets) and thought it was high-time we introduced them to you. Who knows? You may end up discovering a favorite new artist, photographer, writer, or all-around awesome human. This time around, we will be talking to M.C. St. John.

MC: It’s trite to say I’ve been writing all my life, but it doesn’t make it any less true. I remember writing honest, beginning-middle-end stories starting in fourth grade. My teacher pulled my parents in for a private conference to tell them that the stories were good but…well…a little creepy. Mom and Dad were fine with it—so long as I had a way to channel my imagination, so be it. I went on to write a lot more creepy and fantastic and bizarre stories, but I didn’t get serious (or good) enough until about ten years ago. That was when editors started liking them, and sometimes paying me for them. If anyone writes for that long, you know they’re in it because they love it. And I do love it.

MC: I blame my mother, he said from the psychiatrist’s couch. In all seriousness, my mom was and still is a voracious reader, and the page-turners she loved filled our bookshelves at home. I learned about authors and genres before I read a single page of their works. She had an entire cabinet dedicated to Stephen King, and I remember slipping out tomes like It or The Stand just to ogle the scary covers. When I was about eleven, Mom handed me Salem’s Lot and told me to try it out. I did, and I fell in love with the darkness, humor, and pathos that horror as a genre can provide. I wanted to read more of it and try my hand at writing it.

MC: If Mom got me reading, then I have Ray Bradbury to thank for yearning to write. I read Fahrenheit 451 in high school, and I felt Fourth of July fireworks exploding in my skull. The words, the sentences, the passion—they say you don’t forget your first love, and brother, that applies to fiction too. I never knew a story could be told the way Bradbury had in Fahrenheit, along with his other novels and hundreds of short stories I’ve read over the years. And when I found out he was a Midwest boy from Illinois with a love of libraries and rockets, I realized even great writers have humble starts. What got them to where they were was that they never stopped. I took the advice to heart.

MC: Pantser all the way. No matter how many books on writing I’ve read, outlines and character bios I’ve attempted, or background research (i.e., academic procrastination) I’ve conducted, I cannot for the life of me plot my writing into being. It doesn’t work for me. I wish it did, because pantsing can terrify me. How will I write this? Can I write this? All the old doubts come to roost on my shoulders. But here’s the thing: I just have to go write and keep it rolling. The answers come when they need to. And if they don’t? So what? You try again. Athletes, scientists, and jugglers learn by doing, failing, and doing again. As a writer, I’m no different.

MC: Had I done this interview a week ago, I would have said no. As it so happens, I had my first encounter with something on a trip to Sault Ste. Marie. My partner and I stayed in an old but well-kept hotel where guests purported having their belongings rearranged without the aid of the hired maid staff. The ghost is said to be Beatrice, the wife of a former innkeeper, who takes care of the guests from beyond the pale. Sweet start to a horror story, eh? I thought so. I changed my mind when the lights in our hotel room started flickering at two in the morning. Beatrice may not have liked my leaving a wet towel on the bathroom floor after my shower. We didn’t stick around to see if she would leave a mint on our pillow or blood on the walls. I will say, though, the living staff at the hotel were wonderful…while we we were there.

MC: I have found good luck charms never work when you want them to, and bad luck never seems to fail. Maybe the universe is indifferent to our little rituals and muttered words. But does that stop me from placing a voodoo doll above my apartment door to ward away bad spirits? Or avoiding cracks for fear my mother may end up with a slipped disc? Or never ever ever whistling past a graveyard? You bet your ass it doesn’t.

MC: They say those who can’t do, teach. I say those who still believe that, leave. While I write and submit my stories, I tutor students in writing, grammar, and—gasp!—math. I’m all the better for it too. From years of practice, I know how to explain to my students how semicolons work and the pitfalls of misplaced modifiers; when sitting down to pen a story of my own, I have my own grammar skills sharpened so I can get on with the fun stuff.

MC: I don’t, no. What I try to do is create stuff every day. Usually that means a story or a poem or a pun-filled song. The rhythm of making stuff is all the journal I need. It proves I’m still in the game.

MC: My bread and butter has been short stories for a while now. I do love writing poems, though getting them published is another matter. It doesn’t stop me from writing them. But, to be contradictory, can I prefer to write something I’ve never written? Why not? I want to write a novel, and then after I get the first done, I want to write more of them. I believe I will prefer novels the most. There’s only one way to find out, right?

MC: Fish with teeth. What sick sense of humor from which gods conjured such creatures? They terrify me so much that I had to write a horror story about them. It helped…but only a little. They still give me the willies.

MC: I love baking. I can make a mean Irish coffee cake, and I have a knack for baking fruit pies. I don’t even hex the dough either.

MC: A friend of mine says that it takes very little to entertain him and great deal to bore him. I apply that outlook to books. Horror, science fiction, spy thriller, western, crime, weird, experimental—it’s all game for me. If a story takes me away with its energy, I don’t mind if it’s by hearse, horse, or rocket. All genres are welcome.

MC: By the same code I read, so I write. I want to write it all, you know? I will tell say the horror and science fiction stories of mine are the ones that mostly get published. Writing credits should not sway favoritism, though. It hasn’t stopped me from writing wild, strange stories I can’t identify by genre. The point is to play and see what happens. The good ones find a way to readers.

MC: M.C. St. John is my only writing name so far. M.C. is better than Myron Cleophus, which also is not my actual name, but, now that I think of it, could be another great pseudonym. Maybe for my cozy mysteries set in libraries of liberal arts colleges? We shall see.

MC: A strong voice can carry the most mundane story across the finish line. The voice can come from the narrator, the main character, the dialogue, wherever. When a voice is strong, you can feel the crackle of its power the way you can feel the hair on your arms stand on end before a thunderstorm. I believe it starts there. The voice. Now, if the writer finds the right mouth for that voice in the story, even better. The best, in fact. The voice with the mouth to sing it makes a good story great.

MC: The thing I remember wanting to be by name was a paleontologist. When I was a kid, the original Jurassic Park had come out in theaters. I watched, frightened and exhilarated, at the Tyrannosaurus Rex come to life on the screen. I was hooked. I wanted to dig up dinosaur bones and assemble their skeletons. The idea of a treasure hunt thrilled me. That sense of discovery I find in writing now: excavating the earth to see what strange things are there, just below the surface.

MC: I marvel at the trillions of coincidences of heat, water, matter, time, and gravity it took to sculpt the planet I wake up on every damn day. The sheer probability of being here is staggering. If something had an influence in helping create this reality, I am in its debt forever. But for the time being, I’ll take my cue from William Wordsworth and relish the glimpses I see of the spirit that impels through all things in nature. It’s its own miracle that way.

MC: I just finished two books—The Man Who Lived Underground by Richard Wright and Magic for Liars by Sarah Gailey. Both were excellent for very different reasons. Next in my queue is the wonderful tome Jonathan Strange and Mr. Norrell by Susanna Clarke, which should keep my imagination and biceps strong for the next few weeks.

MC: There are few things I require in this world. My partner, my friends, my family, a cup of coffee, good music, a book, and something to write. Everything else comes in and out like the one-act play it is. I want to enjoy the show as I run to write my own fancies. What could be better?