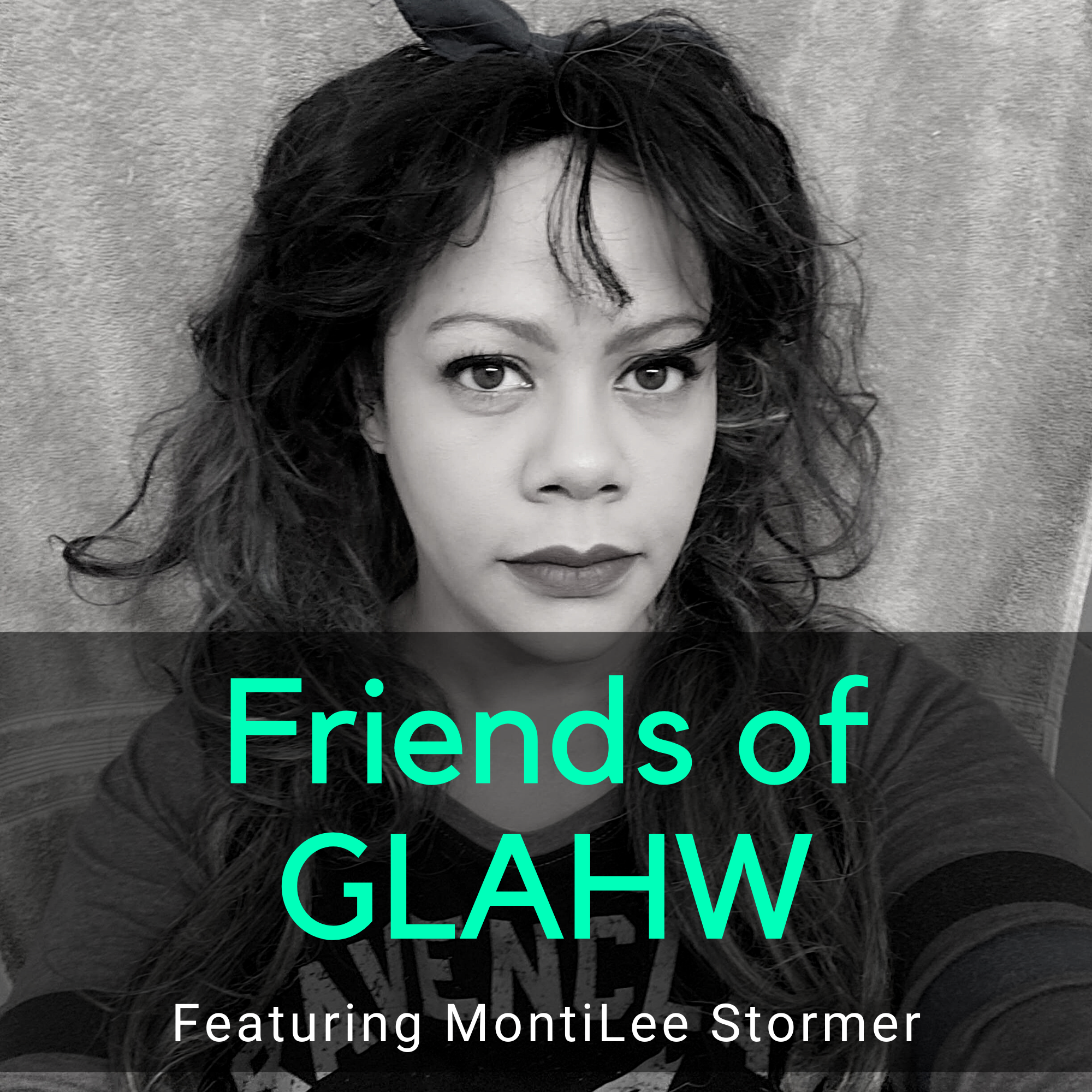 We here at GLAHW have met so many amazing and talented people out in the big wide world (you know, OFF the internets) and thought it was high-time we introduced them to you. Who knows? You may end up discovering a favorite new artist, photographer, writer, or all-around awesome human. This time around, we will be talking to MontiLee Stormer, Teasurer for GLAHW and Member since 2009.

I wrote my first short story when I was 16 on our brand new Laser IIe, which was an Apple knock-off. I called it “Eugene” and I just knew it was going to be the story that would catapult me to the big leagues. I shopped that story to every horror anthology and small press publisher I could find in the local library’s antiquated copies of Writer’s Digest. After college, I started writing weekly for open mic nights on my old Smith Corona PWP. Now, I prefer to handwrite my stories first, then transcribe them to computer. Handwriting has a different flow and I’m not compelled to correct every little error.

If you’re looking for a number, we’ll say I’ve been at it 35 years.

Pretty sure the genre chose me. I’ve always enjoyed scary stories and movies. Detroit residents of the 70s and 80s will remember the Saturday Afternoon “Thriller Double Feature”, Sir Graves Ghastly, The Ghoul, and Count Scary, and I loved those heavily edited movies. This was the very early days of OnTV and days before mass market VCRs so I was happy to watch what I could get.

I will always have the love and support of my parents and close friends, but it was an objective voice that encouraged me to write. My Grandmother and I did not always see eye to eye, being a handful of generations apart. When she gave a compliment, it was like being given a rare jewel, and I took her push to heart. When I wrote my first short story and edited it to my satisfaction (read: barely), I was absolutely sure I would sell it to a magazine and become famous, just like that. I would move to Maine and live next door to Stephen King. We would be good neighbors and our kids would grow up together.  After shopping that one single story for literal years, only then did it occur to me to write a few more stories, or maybe a novel, just in case I became In Demand. Point of fact, I never sold that story and a complete copy of “Eugene” has since been lost to time. It was also 20 years after writing it before I was actually published.

Yes. I often sit down to write with a single scene or sentence or idea. As I start writing, the idea itself blooms. I prefer my pre-zero drafts to be long-hand writing, and there are notebooks and notecards and pieces of carboard with snippets of dialogue or snapshots of scenes. I use to write compulsively when the mood would strike to put me back in that place where Something Bad will probably happen. Then I either work forward or backward, based on that snapshot. After the initial blast, I go back and reorganize the thoughts, remove the notes and ideas into a separate document, often a handwritten notebook or if it’s a longer piece, I use notecards so I can visually reorganize chapters. My brain is probably set up like a library card catalog. It’s very easy to let the imaginative brain just write and write, and I know some writers let the character tell their own stories, but if I have a specific end in mind I need an outline, no matter how badly imaginary characters think they want to live. I’m the boss, and I never let them forget it.

I have this great program called Write or Die which when a word count and timelimit are set, forces a writer to always push forward and leave the editing to another time. I like using it when I need a solid start on a story and I’m lost in my own head. Write or Die is unique because there’s a setting that, when the typing has been idle for a specified time, will begin to delete words. I mostly do it to get a daily word count achieved, but a little terrifying motivation is always welcome.

Probably not, and I’m okay with that. I’m not super keen to meet a ghost or other supernatural cryptid. I like my otherworldly mysteries a remote possibility, not a certain probability.

Superstitions are just another form of prayer, right? They’re a way of being spiritual without singling out one deity. If my right palm itches, I’m coming into money, and when my left itches, I may have a setback (but I kiss it to keep the loss small). I don’t walk under ladders (or through triangles) because acknowledge I’m not the center of the universe. I keep closet doors closed to keep out (or in, depending on your perspective) any boogeymen and I don’t look into mirrors in dark rooms. Some might call it silly but I do believe in a Power I don’t understand and I’d rather not tempt it with modern arrogance.

GLAHW: What do you do for a living, outside of writing?

Job Prime keeps me busy 40 hours a week, allows me to keep the lights on, food on the table, and my small family and I are comfortable. I don’t even list it on LinkedIn because people frankly are scarier than any monster we could imagine. I do have fun side hustles as a movie reviewer and a podcaster.

I keep a planner to hand write upcoming events, things I might want to remember, photos I’ve taken. It’s not a regular diary, like Morning Pages, but it’s a way to keep track. I love systems of organizations, like journals, notebooks, cards, and calendars, even if sometimes I feel like my life is in utter shambles.

I have phases. I write movie reviews weekly, but I enjoy the writing flow of short stories. I have 5 novels in various stages of completion, and short movie scrips come in weird bursts.

People. Agent K in Men in Black (1997) said it best, “a person is smart. People are dumb, panicky dangerous animals and you know it.” People are terrifying – if you can imagine a horrific act, we’ve probably done it to other people or creatures. The FBI says there are between 35-50 active serial killers in the United States – but that’s not counting the abusers, the sadists, or the garden variety psychotics we encounter every single day.

What don’t I do? I knit, crochet, cross-stitch, and needlefelt. I collect air plants and holy water from cathedrals. I like making bento-style lunches and can host a TEDTalk on angelic hierarchy, why Kubrick’s The Shining (1980) is awful, and the evolution of nuns in Horror movies, from 1924 through 2021. I have a few Halloween builds in mind that will require solar panels, LEDs, and a circular saw. I’m a DIYer. I see cool stuff in pictures and then try to recreate what I see. Trial and error is my favorite (if expensive) teacher. I suppose I’m a pantomath – I need to know everything.

In my family, we were brought up to be readers, and while I prefer horror it’s not always my first choice. I love true crime, forensic thrillers, and urban fantasy. I think it’s important to read lots of different genres and subjects because it helps writers be well-rounded and knowledgeable. It also helps to see how words and sentences are crafted, how worlds are built, and see if not understand the perspective of other lives and lifestyles.

I think a good story is relatable to the reader, be it the situation or a character. We may never encounter werewolves or alternate universes in our everyday meat lives, but without characters in circumstances we can connect with – loss, grief, alienation – even the fantastical can seem too far-fetched. It’s not enough to have a good idea, it has to be backed with solid writing and world-building. It doesn’t have to be long. Plenty of great stories are short smash-and-grab affairs that leave the reader shattered. “Be the bat that wrecks someone’s day” is my personal motto.

When I was in the second grade, I wanted to be a fireman ballerina, but early on I realized the impracticality of firehoses and pointe shoes. My high school guidance counselor said I’d be a great graphic designer, but in college, I studied to be a teacher. I really don’t know what I want to be when I grow up. It’s a good thing I don’t have to decide, yet.

Charles Beaumont, Rod Serling, Richard Matheson, and yes Stephen King are the writers I read as a child that made me want to create worlds of my own. Now, I’m inspired by Eden Royce, Chesya Burke, and Tananarive Due, because they each have shown how the horror of our collective history is a story that needs to be told from as many voices as possible.

This year, I’ve finished Christopher Golden’s Road of Bones and David Koepp’s Aurora, and both were amazing. I’d like to catch up on Kathy Reich’s Temperance Bones series (nearly finished with Conspiracy of Bones then on to The Bone Code and Cold, Cold Bones), but immediately in my queue is Paul Tremblay’s The Pallbearers Club.  To round out the year I’ll have a short listen of Cassandra Khaw’s Nothing but Blacken Teeth, and I’ve heard fun things about Never Saw Me Coming by Vera Kurian. Audiobooks are my drug of choice, and I’ll listen to anything once.

I’m a Tomatometer-approved critic and you can find my movie reviews at MovieReelist.com where I’m the senior content editor. I see about 200 movies a year, so maybe I’ve written about a recent favorite of yours. I shoot my mouth off on Twitter, post pictures of my cats and bento boxes on Instagram, and stalk my friends on Facebook (I think you know how to find me there). If you’d like to see what recently published fiction, there’s my Amazon Author page, and I have older out-of-print stories available on my website.

Oh, and yeah, I do bi-weekly pop culture podcast if you’re into hearing fangirls talk about movies books, and tv shows.

Stop by and say hi.