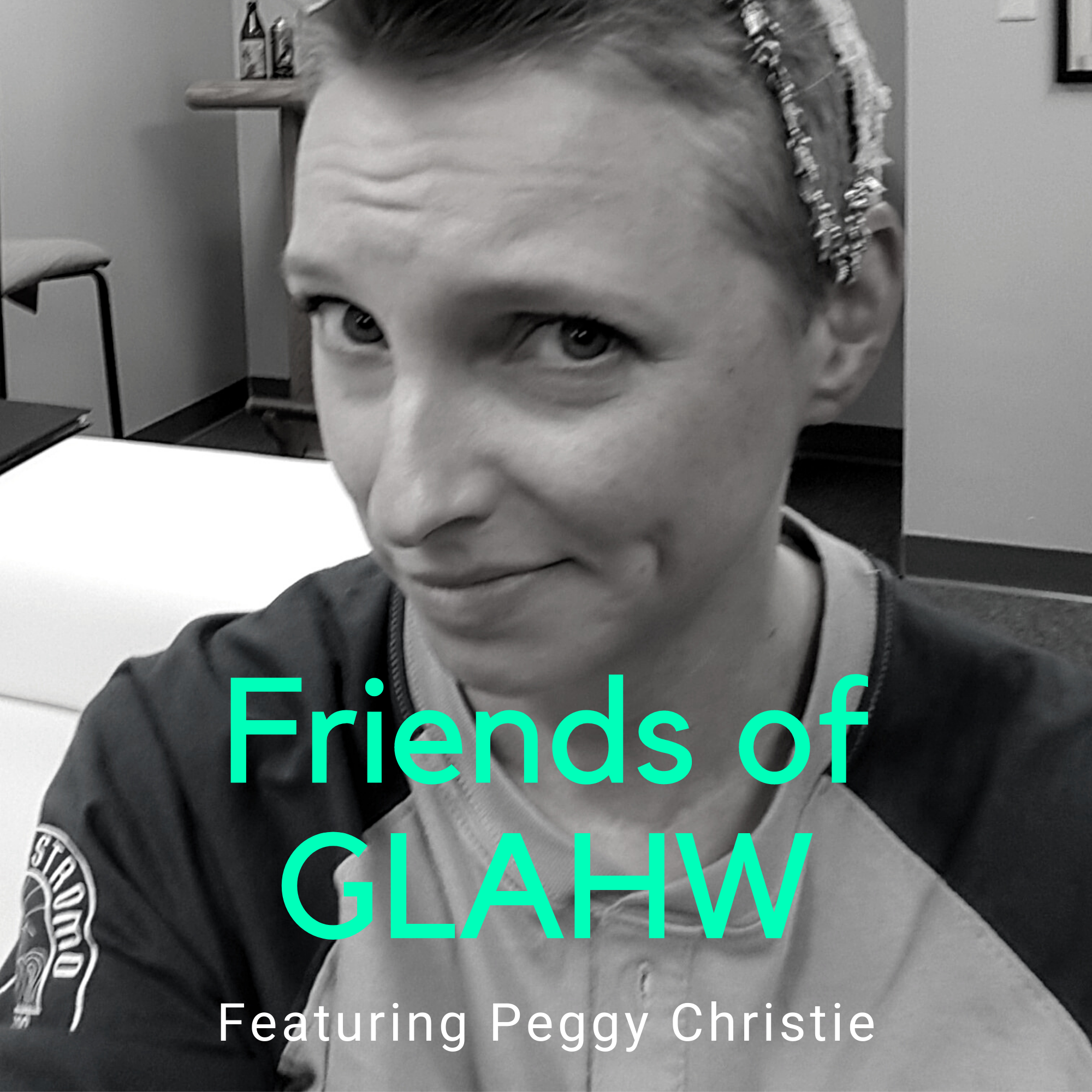 We here at GLAHW have met so many amazing and talented people out in the big wide world (you know, OFF the internets) and thought it was high-time we introduced them to you. Who knows? You may end up discovering a favorite new artist, photographer, writer, or all-around awesome human. This time around, we will be talking to Peggy Christie..

PC: I started in 1999, right after one of the shittiest working days I’d ever had. After that, when I didn’t end up killing my boss because I’d purged my frustrations out on paper, I thought, “That felt really good. I wonder if I can do it again?” Just within the past couple of years, I started focusing more on writing as a career, as opposed to something I love to do but I’ll get to it later mentality. 2020 put a bit of a damper on that but it won’t last forever, right? RIGHT??

PC: I don’t think I chose it on purpose. I’ve loved the genre since I was a little kid, but I can’t tell you why. Maybe it was a great escape; maybe I don’t have a soul. Who can tell? But I love it and can’t imagine writing anything else.

PC: Total pantser. I do take notes, or write down ideas I want to incorporate into a story (usually longer works like a novel). But mostly I just start writing.

PC: I think so. I’m pretty sure my mom came to visit me in Chicago the night before I started my internship at the Lyric Opera (spoiler alert: she had died just 1 month earlier). I was terrified and had been crying for hours (I actually had a black eye the next morning). I was lying in bed, trying to fall asleep but my brain just wouldn’t stop. Suddenly I felt the mattress down near my feet sink, as if someone sat on the edge of the bed. Something told me it was my mom coming to let me know everything would be all right. I didn’t want to open my eyes – not because I was afraid to see her, but because I thought she would disappear if I did. So I laid there with my eyes closed, gradually relaxing, and about 20 seconds later I felt the weight lift off the bed and it was over. I finally fell asleep after that.

PC: I used to be, but I don’t think I am much anymore. I’m not sure what changed. I got older; lived long enough to realize knocking on wood doesn’t stop bad luck as much as making better life choices does. Doesn’t mean I dismiss anyone’s belief or attitudes about superstitions. There’s always the possibility I’m totally wrong.

PC: I think short stories and novels are the most fun for me. I’ve written a few poems but it’s not my go-to format. I’ve only written two comic scripts and as satisfying as it is to finish one, they are a giant pain in the ass.

PC: Dying alone; the dark; being trapped in a small space that slowly fills with water and I can’t escape. You know, the usual.

PC: I love video games. Survival horror (Resident Evil, Silent Hill), hidden object, mystery/puzzle (like Myst or Mystery Case Files). Really starting to work on a garden this year. I can hardly believe the seeds I started inside are sprouting! And I love baking. It’s so relaxing, and you get to eat the results!

PC: Not often because I’m a slow reader. It takes me forever to get through a book, unless it’s so well written I can’t put it down. I like the YA series Skullduggery Pleasant. When Memoirs of a Geisha came out, I snapped that up so damned fast because Japan (I’m obsessed with Asian culture for some reason). I’ve read some fantasy – the Dragonlance Books are phenomenal.

PC: I assume you mean subgenre of horror. I don’t really have one particular theme or monster I write about more than any other. Ghosts have been common for me. Characters with mother issues is another theme I’ve noticed. But one style or creature more so than any other? Not really.

PC: Nope. If using my real name hurts me (because I’m a woman), then maybe by me using it, the perception of female horror authors being nonexistent or less than a man can start to change.

PC: Relatable characters. Lots of elements make a good story, but if you can’t get behind or understand or even hate at least one character (because you know someone just like him or you’ve been through the same situation as her), why bother?

PC: A veterinarian. But my Death by Cat allergy made me rethink my life.

PC: A little bit. I believe in something greater than myself out there.

PC: Bentley Little and Dean Koontz made huge impacts on me, as a reader and a writer. True crime/history can give me a TON of inspiration (just learned about one of Stalin’s gulags that would make Lord of the Flies look like a summer picnic). Sometimes even ordinary, every day things can trigger something.

PC: The same books I started reading last year (I told you I was a slow reader). The Consultant by Bentley Little; Skullduggery Pleasant Book 3.

PC: I am ADDICTED to Korean Dramas. Sometimes my husband has to hide in the basement because I’m literally screaming at the tv when a character is being a garbage human being. Which is a lot, apparently.

Except for maybe 3-4 years during college and right after, I’ve had at least one dog every day of my life.

The best way to destress is putting on pajamas, having a drink and a snack, and binging horror movies, particularly classic or cheesy ones from the 50s and 60s.

I love classic movie musicals – The Music Man, Seven Brides for Seven Brothers, In the Good Old Summertime, and Meet Me In St. Louis being my top favorites. Modern favs would be Rocky Horror and Repo Man: The Genetic Opera.